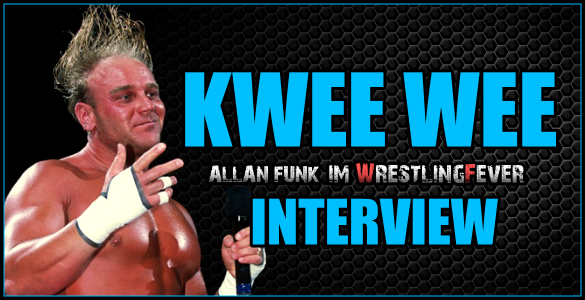 WF: Thank you, Allan, for doing this! We hope you´re doing well?

A: No problem! Thank you! doing great!

WF: I´m always happy to see the ‚old‘ WCW faces on todays social media. How do you see this development?

A: Its great to be on social media, its a great way to keep up with old friends and family out of state.

WF: Your career started in Ohio, some time before the WCW Power Plant. How did you become a part of WCW, how difficult was it to get in?

A: I did the 3 day tryout at the WCW Powerplant in July of 1998. It was the single hardest thing that ive done in my life, up to that point. very hard to get in! I was the only one who made it out of 30 guys!

WF: Is it true that you paid $250 for the tryout? What did this price include?

A:Yes, Unfortunately! the priced included me getting my ass beat for 8 hours a day for the 3 days!

WF: How do you remember the training and who did you see come and go during the first days?

A: The training was top notch, just look at all the talent that came through there, Goldber, myself, chuck palumbo, mark jindrak, mike sanders, Sean O’haire, elix skipper & tons more! I saw hundreds of top athletes from ALL sports tap out and never come back, the training was just too much for most.

WF: Do you remember who started with you and made it into the TV tapings?

WF: Who were the trainers, aside from Sgt Buddy Lee Parker? I remember that Paul Orndorff took over. Parker was also in action on TV with Goldberg?!

WF: Do you know what kind of injury Orndorff had when he fell over during Fall Brawl 2000? It´s still a mystery to me what exactly happend and I never saw him again. How did you experience the situation?

A:Paul had some nerve damage that Unfortunately paralyzed him during that match. I went to the hospital afterwards to make sure he was ok. he was bummed out but overall in good spirits.

WF: Is it true that you started working without being under WCW contract and had to work a sidejob?

A: Initially while in the powerplant, I worked at a place where they set up corporate parties.

WF: „Kwee Wee“, the man who always came to ring in full style. Who came up with the idea of your look (outfit, hairstyle) and what does the name mean, who had the idea to call you that?

A:I came up with the hair and the colors. It was Vince Russo that came up with the name. the name was taken from a saturday night live character Kiwi, but do to copyright infringments, it was changed to “Kwee Wee”

WF: I always saw you as some kind of comedy character, was there ever any thought of changing the gimmick in another direction to give you a push?

A:I would have loved that but unfortunately I couldn’t change anything.

WF: Many still rant about Eric Bischoff, how did (or didn´t) you get along with him?

A:I loved Eric, always treated me good and I was looking forward to him buying the company, unfortunately that never happened.

WF: Are you still in contact with old colleagues (if so, who) and how do you look back on your time with WCW?

A:I keep in touch with a few of the guys. I loved the times I had in WCW and would never change that!

WF: Let me be blunt: After WWE bought WCW for a give-away price, they first took you along but later released you. Were you ever in Stamford, did they have plans or just no ideas?

A: Sent me to Their developmental territory in Louisville and Cincinnati but never had plans to do anything with alot of the WCW guys.

WF: How did you learn of WCW being sold? Was it foreseeable?

A: Got a call from Kevin Nash. He told me vince just bought WCW and he wasn’t sure what was going to happen.

WF: You also appeared at TNA alongside Lenny Lane. How did you like it there and what are the differences between TNA, WWE and WCW?

A:I loved working with Lenny, he is a great talent and good friend. TNA & WCW was pretty similar. WWE just sucked for us WCW guys, we never had a chance!

WF: Who came up with your ‚Funkster‘ gimmick for WWA and how did you get along with Hulk Hogan?

A:I came up with it, I really didn’t want to do it but it got me booked in All Japan Pro Wrestling.

WF: You got badly injured durin a tag match a few years back. What happend, what kind of injury was it and how was the recovery, all good now?

A: I got Smashed in the face by a Sonny Siaki knee, which gave me multiple injuries, including a broke orbital socket,skull fracture, broke nose, 2 ear drums busted, multiple plates and screws in my face, multiple surgeries and my right eye popped out of my head but other that that, it wasn’t too bad! LOL! It took me about a year to recover, but ro this date i still have minor complications.

WF: Do you have a funny or interesting (road-) story from your WCW times you can/would like to share with us?

A: Once I had so much “HEAT” at a show in Tennessee, that the crowd came after me and chased me down a hallway. I had to hide in an old room filled with desks until the cops came and escorted me to my car. It was actually pretty scary, people had knives and threatened to kill me several times! When I told Paul Orndorff he just said “ SHIT YEAH KID, THAT’S HEAT!”

WF: You are now 50 years old but still quite in shape. How often do you train/work out nowadays, what role does wrestling play in your life now and what are you currently doing?

A: Thanks, I train 5-6 days a week, mostly bodybuilding style training with a strict high protein diet. I still wrestle from time to time. I’m still waiting on a call from Chris Jericho, for my AEW debut! Wink! Wink!

WF: I noticed you are a frequent guest at podcasts and now even have your own? Please tell us more…

A: Yeah, my podcast is called “GetFunk’d” and it’s on Twitch & youtube under MWAWorld, please check it and subscribe to the channels.

WF: Allan, thank you so much for you time!

A: You’re welcome! thanks for having me be part of this!