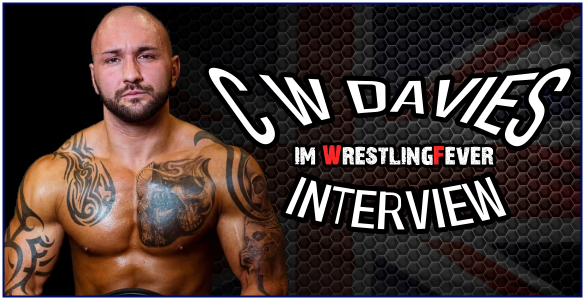 WF: We are happy to have won the first LWP Heavyweight Champion, „The Alpha Athlete“ C. W. Davies, for this interview, thanks Charlie for the approval!

C: It’s an honour to be on. Thank you for having me.

WF: The world has been suffering from the pandemic for almost 2 years now, but in the UK it was still possible to host some shows in 2021. How did you experience the year as a wrestler, the birth of „LWP“ and possibly the solidarity in your home country?

C: The start of the year it was hard. Limited the number of shows and audiences to 50 % capacity. But once the restrictions were lifted fully it was pretty much back to normal. New companies started such as LWP and its been an honour to be on their shows from the start and watch them grow.

WF: When I say that you have used the last 2 years to train hard, then I am anticipating this statement for you. If you look at photos of you from 2019 and then see current pictures, all you can do is take off your hat. How is your training currently and do you also pay attention to your diet?

C: Currently I am training for a body building show. In body building I last competed in 2017. 2018 and 2019 I focused a lot more on strength training and I was relaxed on my diet. Now I eat 6 meals a day, everything is weighed out, so I know exactly what is in my body.

WF: One of your coaches is „Ken Anderson“. How did it come about to train with him? Was that a few seminars or did you train with him during your time at NWA or the American Wrestling Federation in the USA?

C: I was invited by Nick aldis to attend the debut TV tapings for the NWA I asked if he knew any reputable training schools over in America so I could get some training in while I was over there. So I went to minneapolos and stayed with Ken for 10 days. Ken took to the gyms and out for food. I trained in his academy and he looked after me really well. I highly recommend if anyone get the chance to train with Ken if they can. While I was there I hung out with Dante Martin and JDX. They got me some work with the American wrestling federation.

WF: Were there any other seminars (with others)?

C: I have been to plenty of other seminars with Jeff Jarrett, Shane Helms, Dave Taylor and Joseph Connor to name a few.

WF: If you look at the careers of wrestlers in the UK nowadays, many trained with the „UK Pitbulls“, which are of course also a household name here. How did it all start for you?

C: I watched wrestling as a kid like most people involved in wrestling. I remember asking my dad to go to a show when I was about 10. He told me to grow up lol. My first experience of wrestling was back in 2010 I looked into going to WAW but I was not committed enough. In 2017 I went to FSW training school and had my first match with furio within a week. Then I have pretty much learnt on the job. I don’t have any roles models to say as I am my own person. But there are plenty of wrestlers I look up to. Doug Williams, fit Finely Jeff garrett and I have to really say the UK pitbulls haha.

WF: When did you play your first official match and what memories do you have of it?

C: I had my first match as previous stated a week into training. It was a quick 8 minute match. Furio called the whole match. It was very basic and in front of about 10 people.

WF: You have already held a number of titles in the course of your career, now you are the figurehead of the new LWP, and you recently became the World Heavyweight Champion there. At this point we congratulate afterwards and ask what this title means to you?

C: Being the first ever LWP heavy weight champion means the most to me. There is only ever one first. I can’t wait to defend it.

WF: Big f`n Joe was also listed as one of your trainers, is hardcore wrestling an option for you, can you enjoy it?

C: Hard core wrestling yes. Death match no. I have done a few hardcore matches but death matches aren’t for me.

WF: You have a lot of tattoos that adorn your body and a „cover up“ on the left chest. Why did you have this overhauled and do your tattoos (apart from the tribals) have a certain meaning that you want to share with the fans?

C: I have writing on my chest which is about my grandad. He passed away in 2010. The ones on my fingers all have meanings. My and my other grandfather. I got the England tattoo covered because it was terrible and one of my first.

WF: It is not uncommon for your wife to be by your side and you are the father of a family. If your kid wanted to pursue a wrestling career, would you want to support that?

WF: Getting international bookings is usually not that easy, you are very involved on social media and I’ve read that you would go anywhere. What goals do you still have on your wish list?

C: My goals in 2022 is to get back to the states and work in Canada and Germany.

WF: I would be happy to see you in Germany one day, with the IPW the LWP has a good partner at its side! Maybe something is possible! The German beer is highly recommended!

C: Yes working for IPW is a goal of mine It’s something I have wanted to do for a while. I would jump at the opportunity.

WF: Stay healthy, thank you for your time!