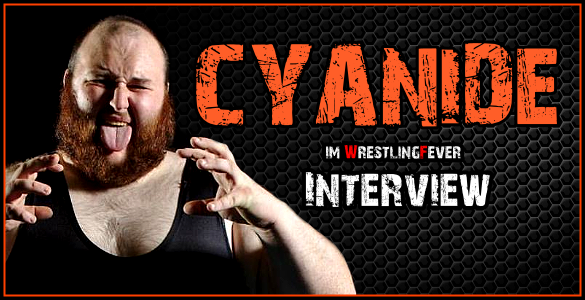 WF: Thanks a lot for your time, how are you these days?

C: Thank you for having me. I’m great thanks, busy but good.

WF: We are delighted to have won you for an interview. The interest in wrestling has increased during the past years. How do you experience it, especially in the UK?

C: The UK scene has exploded since my debut in 2006. Back then if the audience was over 100 people then it was a big achievement. And now there are more shows than ever and more crowd also. It’s to a point where it’s slowly pushing it’s way into the mainstream again and hopefully with World of Sport and WWE UK this can finally break through and make wrestling as popular as it was in Britain back in the day.

WF: You are a big and heavy guy. Has it always been like that?

C: I’ve always been a big guy. I used to play rugby quite a bit and then found wrestling. This made me start working harder in the gym and start putting even more size on. I think this makes me unique in a lot of ways and makes me stand out.

WF: Are you someone who follows a strict diet? Are you trying to keep or define your body?

C: I follow a rough diet that I use as a minimum to make sure I’m getting enough protein and carbs in. My plans at the moment is to lean up a little but not lose too much size. I very much think my size and agility is what sets me apart so I wouldn’t want to lose that.

WF: How do you remember your first training sessions?

C: I remember turning up to Futureshock Wrestling in Manchester and being scared to death. I was a quiet shy kid that was very unconfident and uncomfortable in his own body. My first session was an eye opener as to just how much work was involved to succeed in wrestling. I remember that it was a tough and brutal session but I loved it. I was hooked from day one.

WF: What or who got you into pro wrestling?

C: Pro wrestling for me was something I sort of started by chance. I used to watch it on TV a little but not too much. Then one day on the way back from a holiday, my brother was watching a WWE event on a DVD player and I just said ‚wow, that looks like so much fun‘. I didn’t think there was any way to learn in England and was ignorant in thinking there was only really WWE and TNA. I did my research and found Futureshock Wrestling and as I said above it just went from there. The wrestlers that really made me want to be a part of it were people like Shawn Micheals, Kane, undertaker, the rock and most of all, and this may shock people, but Rey Mysterio. The stuff he was doing was just a spectacle and I knew I wanted to make people look as good as he did.

WF: With *Demolition Davies* we also have one massive wrestler who draws attention with his appearance alone. You were able to fight several matches as his partner, what are your thoughts on the matches, Davies and NEW?

C: Demolition Davies and I have a few similarities but we are quite different wrestlers especially if you watch our matches. Tagging with him was great and we really were a force to be reckoned with. NEW have been great to me. They gave me a chance to show my work to a whole new audience and I think since my debut it’s fair to say I’ve made an impact and become one of the main players there.

WF: How would you like a possible dream-match between Davies and you and will we see you at NEW again?

C: I would describe that as a war. I’m ready for any challenge, any time so this would be something I would not back down from. As current tag team champions and new number one contender for the NEW heavyweight championship I think it’s safe to say you’ll see me at NEW for quite some time.

WF: How would you describe your style?

C: I would describe my style as hard hitting and big slams but also with a unique wow factor. I never wanted to just be a big guy, I wanted to be able to shock people and show I’m more than that. I mean no one expects a 420lbs moonsault or drop kick especially not the opponent.

WF: WWE doesn´t focus on the typical athlete anymore, meaning the well-toned guys, but we also see more lankily or weightily ones.
What do you think about that development and is WWE an option for you?

C: I think the change in body types in WWE is a mixed bag. I miss the huge superstars of old but then again I also think it’s what people want these days. I’d love to work for WWE in the future. It’s definitely one of my goals I’m working hard for.

WF: You are a tag team as well as a singles wrestler – which suits you better?

C: On this I honestly can’t decide. I enjoy and dominate in both so either way I’m coming out the winner.

WF: How did it come to your name?

C: My name comes from a deadly poison. I wanted something that was different but also straight away told you I was a killer. I think this does that.

WF: Who trained you?

C: I was trained by quite a few people. My main influences came from Sam Bailey, Dom Travis, Damon Leigh and also Alex Shane. I trained at Futureshock Wrestling in Manchester and I can’t recommend it enough. It’s a place that gives you all the tools to make it.

C: I don’t have either. I have people I respect but to me I want to be the first Cyanide, not the second such a body.

WF: At last: Do you have a funny road story to share with us?

C: I won’t go into great detail but there was once where the guy driving me and 2 other wrestlers kept taking strange turnings and we ended up at the top of a mud hill with no road on the other side. Myself and a current WWE superstar had to manually pull concrete pipes out of the ground to MAKE a road to drive on to safety. Turns out the driver had his satnav set to walking directions and not driving. We never let him forget it.

WF: Thank you very much for your time!