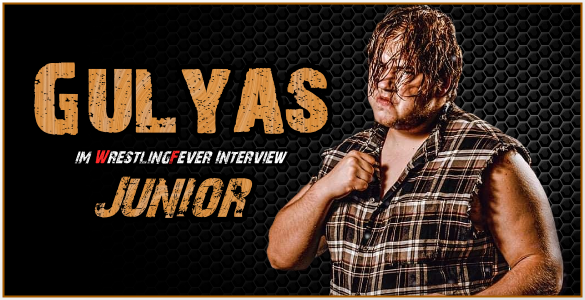 WF: Gulyas, thank you for your commitment , happy birthday retrospectively also at this point, we hope you are fine?

G: Thank You for the invitation. Yes, I’m fine thank you, this phase of the year was pretty calm for me.

WF: Usually we always start the interviews by asking when and how everything started for you. But for you I am primarily interested in why you call yourself Gulyas (Gulasch) junior – how did you get that name?

G: Well, when I was ready for the debut, I had the idea of the villiager gimmick with the bull thing too but I missed the name. Several options came in my mind and in the beginning I tought about non-Hungarian names and some of us sounded really cool but in the end we spoke with David Turger who is the leader of HCW and we ended up that I should have a Hungarian name. And after that, the whole HCW crew started a brainstroming about names and a lot came up, like Oláh, Kovács and in the end someone dropped in the Gulyás name. And why we choosed it? Because the Gulasch is something very Hungarian and people know this word all over Europe and beacuse of it, when they hear it they associate to Hungary from my name. So yeah long story short, I choosed the Gulyás name because of it evident, that I’m from Hungary.

WF: Wrestling has developed really well over the past few years and we were able to see some talent from Hungary here too. You have been trained by the Arrows of Hungary (Icarus & Dover). And now the question that would actually have been the first: How did it all start for you?

G: I was 11 when I first saw wrestling. I saw it on TV and it was the Royal Rumble 2012. I didn’t know what I exactly see but I felt it is a cool thing and I want to watch more of this. After we moved to capital city of Hungary which is Budapest, I started to watch WWE with some of my classmates because they also liked wrestling but for me it was more thank just like somthing, I really loved to watch it. In 2013 my classmate told me that there is a Hungarian promotion called HCW and they organise shows regulary and my answer for it was just “OK and where can I buy ticket?”. Later that week I begged enoughto my parents to buy me the tickets. So in 2013 I attended to my first Pro-Wrestling show. After this point there was no returm. I watched it and talked about it everyday. And in 2015 on the 7th of March I went to my very first Pro-Wrestling training and rest is history.

WF: How is the scene in Hungary to be seen, is it still in its infancy or are there many good and serious promotions / wrestlers?

G: There are 2 bigger promotions and one smaller. The 2 biggers are Passion Pro and HCW and the smaller one is called XWP. HCW is the oldest in Hungary and they usually do their shows in front of 400-600 people and they are always super loud. The Passion Pro is the newest promotion in Hungary. They have a different concept on their shows because while HCW mostly working with local talents, Passion Pro always have Europe bests on their card and beside of them they always have some Humgarian faces too and you can check all of their shows on their YouTube channel. There is a bigger circle of succesful wrestlers in Hungary. Wrestlers like Peter Tihanyi, Bence Toth BT, Nitro, Maverick are the proof that the training system of the Arrows is works. The HCW dojo is the best Pro-Wrestling dojo in Eastern Europe, they have four separated classes (basics, beginners, intermediate and advanced classes.).

WF: You’re still quite new to the biz, and you could also be seen at wXw. If I can be honest, you visually remind me of Trevor Murdoch. How would you describe your gimmick, demeanor and style?

G: Yes you are right I had my first match in front of a live crowd in 2019 on the 5th of January, so yes I’m still young and new but I’m as hungry for knowledge as young I am. I heard it from more people that i have a little Murdoch in me and I can agree with it, he was one of the examples when I collected ideas for the gimmick(The Briscoes were the others). Gulyas Junior is a young man from the countryside of Hungary who uses his raw power and his common sense and sometimes his armpit to wrestle. The key of this gimmick is the simplicity. I mean nowdays I gave it a little bit of spice with the “Bull of the Village” direction, which is meant to symbolize that I am not just a villager but I’m THE villager. Because of simplicity the style cannot be a flippy, cool guy style so I decided to use only slams, suplexes and strikes. so yes, Gulyás Junior is loves to fight and loves to learn from every fight.

WF: Do you think you’ve already found your gimmick? I also saw you come to the ring with a mask on…. Who has influenced you so far?

G: To be honest I really feel that I found the base of my gimmick. In the future it can go to several directions and I’m pretty sure that in every promotion it will be a bit different becasue with this gimmick I can do any kind of matches. And the most important thing is beacuse of the simplicity every people can easily understand who is Gulyas Junior and in the future I can build anything on this base. Nowdays I try to take it in a serious direction that is why I choosed the Bull as the symbol of Gulyás and picked up the nickname “Bull of the Village”. But if I’m a bull of anything I should have something which is remind people to a bull so that’s why I wear the bull mask during my most important matches and it also give to Gulyas a different, tougher mindset. Speaking about influence, as I mentioned before Murdoch and The Briscoes gave me a lot of ideas. Icarus and Dover are really keep me motivated. Icarus always make me stronger mentally, and Dover really want me and Peter to become better day by day.

WF: You have been active in Austria, Hungary and Germany so far, do you take care of your bookings yourself or do the trainers do it? Maybe you can give tips to new talents here and where do you still want to wrestle?

G: Well, a lot of my bookings came through Icarus. But after I said OK usually I am the one who communicates with the promoter. I think it is a good thing to have a coach/mentor/trainer who can take you places because without it I think I wouldn’t even made to Czech Rebuplic. But don’t think that Icarus take us to places without work. I have to work hard for the chances. What I can say to new talents is that please be patient. Be patient and work as hard as you can and always stay passionate for Wrestling. For last I really would like to wrestle in the UK and my goal for 2022 is to be a regular wXw member and to wrestle in as many countries as I can. Big goal is France, Belgium and Italy.

WF: You are also a successful tag team wrestler and currently hold the tag title in Hungary. What goals do you still have in mind?

WF: What do you do when you are not in the ring?

G: Usually when I’m not in the ring I’m working. I am a receptionist at a gym as my civil job. Sometimes I go out to watch a football game with my dad. But mostly in my free time i watch wrestling.

WF: We wish you the best of luck, success, but above all health! Thank you for your time!

G: My pleasure! Take care everyone and thanks for read this little interview with me! Hope to see most of you in 2022!