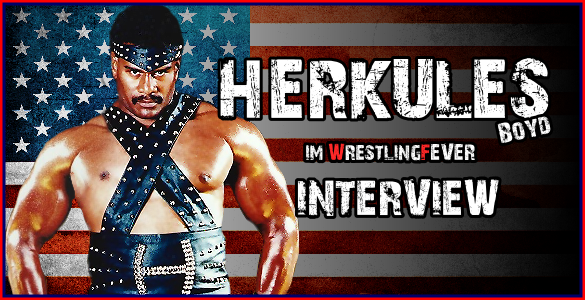 WF: Greg, I´m delighted that you agreed to an interview to talk about the *good old times*. How are you nowadays?

H: Thank You Markus, I am great and delighted to participate in the interview, how is Europa.

WF: Do you still keep yourself in shape?

H: Yes, I am training cardiovascular and weights 3 times per week and I like my stretching regiment everyday. Thanks for asking

WF: You (like many wrestlers) came to wrestling through football meaning that before your wrestling career you already were an athlete and worked on your body – right?

H: Yes Markus, I began powerlifting in high school and competed in Power meets and Bodybuilding competitions regularly, when I was in Bremen 1989 with The Big Otto Wang Catch Turnier, I became the Bandrucken (Bankdrücken), Landes Miester (Landes Meister), 525 LBS I attribute that Championship to my devout training regiment, I am also Hall Of Fame Collegiate and 2 time State Football Champion and All West Coast, 2nd Team All American Player. I played 9 years American Professional Football Denver Broncos & New England Patriots. 1988 I defeated The Iron Sheik for The IWA Heavyweight Champion and I wore The Belt 2 years.

WF: It´s said that you´ve been quite successful as a football player, is that right?

WF: Is it true, that one of your football colleagues was Vader and he brought you to the CWA?

H: It is true that Vader introduced me to Big Otto Wanz. But I didn’t know Vader in College we met later in Wrestling Career.

WF: From there, how did you get into professional wrestling? Did you want to get there or did someone *talk you into it* like talent scouts.

H: Well I was introduced to Verne Gagne whom invited me to Wrestling Camp in Minnesota were i was trained by Brad Rheingans, Billy Robinson, Verne Gagne. Rob & Rick Steiner.

WF: How do you remember your first matches and the reactions from the fans?

H: Yes my very first matches were in America and all BATTLE ROYALES. Very fun, the crowd loved me, my first big match on TV vs Terry Funk The crowd thought I was Soul Man ROCKY Johnson. Good times

WF: Is there a special match or moment in your career that you will never forget?

H: Yes I had 1st Big match in Denver Valentines Day vs Larry Zybysko. I pinned him in 5 minutes and I wrestled Steve Regal and I pinned him in 6 minutes, I Tag Teamed with Jimmy Superfly Snuka VS Colonel Dexter’s and Brad Bad Boys we kicked they’re butts. LOL
Also Championship VS Iron Sheik 1988.

WF: In 1987 you were in Graz for the first time which must have been a whole new world for you compared to the United States?

H: Yes very different i wrestling 5 rounds VS time allotment and European style I loved it.

WF: You stayed for a whole season and then 1988 you took a break for almost a year. What did you do in the meantime?

WF: Is there a German food or drink you like?

H: Yes sir, Swine Haxen (Scheinshaxen), and whatever Big Otto was having. LOL

WF: You were one of the wrestlers performing the hit *Young, Strong & Healthy*. Fans still enjoy the song. What are your memories about the recording sessions, how long did it acually take to record it and how do you like the song?

H: Yes Markus, I was a lead singer on that song I loved it we did TV, Radio, Club Performances and sold more than 10,000 copies. Alex Rehax did a good job with all of us and we recorded the song in one.

WF: You are a very religious person. When did you find God?

H: God found me as a child the Nuns wanted to take me and raise me in the Church but my Mother said no but God followed us all my life and blessed me with incredible strength and understanding.

WF: What are you doing recently?

H: I worked for The Denver Broncos for 19 years and retired 2015 so now just doing Ambassador duties to the community for The Broncos and training.

WF: Is there something you want to say to your fans overseas?

H: I Loved The People in Germany and Austria, they invited me made me feel welcome, I made many good friends over there i have since Come to know The Bambikiller Weltmeister, Chris Raaber a very Strong Champion, and Paul Neu (Cannonball Grizzly), My friend Heiko Lehmal Europa was good for me.