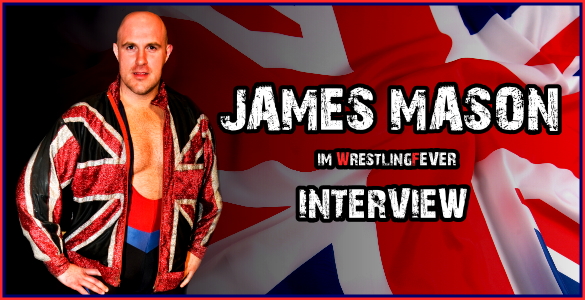 WF: Thank you for your commitment to this interview, James!

WF: How many others, or even most of the newcomers you were a fan of pro wrestling before you stepped into the ring. If you believe Wikipedia, you were enthusiastic about „Big Daddy“. Who was this man and what made him so special for you?

JM: Yes I was a huge fan of Big Daddy, also Giant Haystacks. These 2 stars were probably the biggest names in Wrestling through the late 70s and 80s. They was not exactly the best wrestlers but the larger than life character they had ment they were the most exciting to me. Even now when looking at youtube I still really enjoy watching these 2 stars. This was up until I was about 10 years of age then I understood wrestling a lot more then could really appreciate a lot of other wrestlers like, Steve Grey, Mal Sanders, Rollerball Rocco, Fit Finlay.

WF: Catch/wrestling is a sport with tradition, we can see you regularly at POW on the legendary “Schützenplatz” here in Germany. What do you think about traditions, ringer parades and possibly yellow and red cards?

JM:I love tradition, especially in wrestling. If I had my way Wrestling would still be as it was during the 80s and early 90s. There is nothing wrong with todays wrestling as far as the actual wrestling is concerned but I just don’t feel there is as much connection with the audience as there was then. As for the German Tournaments. I loved the old concept of the parades and yellow cards. I was lucky enough to do few Germany Tournaments, longest being 60 days on the Schutzenplatz and I can honestly say it was the best times I’ve ever had in the job. Even now when I return to Germany especially Hannover for POW it’s still the highlights of the year for me!!

WF: Power of Wrestling holds events in the traditional framework regularly: Tent for several days and on legendary ground. How do you like the concept today – a successful alternative to the current product?

JM: Yes I love concept today but I completely understand that the job has changed over the years so I doubt it would be possible to go back to that way and for it to be a financial success. The times of the month long tournaments are well and truly gone but if they should ever return then I would love to be involved.

WF: Dan Collins is also a term in Germany particularly. He was, among others, your coach. How can we imagine the training with Collins in the early 90s? Still very oldschool everything?

JM: Danny Collins didn’t actually train me. When I started there wasn’t really any training schools around so other than my amateur wrestling training I did not really have much training. When I was 13 I started to help an old Referee to put the rings up so before the show I would get in the ring and try and teach myself how to fall and hit the ropes without hurting myself to much. After a few weeks of doing this odd wrestlers would give me 5 minutes of there time just to give me a little help. Danny Collins actually was one of the wrestlers to do this. So I had my first match on July 29th in Worthing against Darren Walsh (Thunder). The match didn’t last long at all but I guess I did ok as I was pretty much full time wrestling from then on. wrestling for All Star Wrestling. So I think that was my training, wrestling 4/5 nights a week against some of the absolute best wrestlers at the time. Danny Collins, Steve Grey, Mal Sanders, Richie Brooks were all wrestlers that i remember really helping me the very early stages of my career.

WF: Now you step (which you have to keep in mind) into the ring for over 20 years. You are just about 30 years old & have seen and experienced a lot. Is there such a thing as personal highlights, career and possibly emotional?

JM: Im actually just about to turn 36 and have now been wrestling 22 years. So many highs in the job so really hard to pick. I guess my 60 day tournament in Hannover would be one of the highlights. Also any of my Japanese tours. I also once had a tour of the Canada working on a TV show called Wrestling Reality. That was probably my favourite time in the job. Not really for the wrestling but for the good time i had while there. A great trip with a great Bunch of Lads. Brody Steel was one the organiser of that trip and im very greatfull that i was able to be on the trip. I also have a very memorable match that i did in 1994 at Hasting whitre rock theatre, It was a tag match myself and Robbie Brookside taking on Karl Kramer and Giant Haystacks. A complete mis match in size but an amazing match to be involved in. Taking the big elbow off Giant Haystacks at only 15 years of age was without doubt the most terrifying experience of my life in wrestling!!!

WF: Many young wrestlers are dreaming of working and exercising in Japan or Mexico once. You were there several times, what make this countries so special for you?

JM: It was purley down to the actual wrestling shows that made it so special. Every wrestler male or female were all fantastic wrestlers so every match every night was superb. I still love to watch the matches at the show i wrestle at so for me it was great watching the shows aswell as being on the shows. I was very lucky while there as all they wanted from me was to be a pure British wrestler. So i was lucky enogh to do very well over there for doing what i can do best. I’ve not been there for a long time now i hear the scene has changed abit over there but i still erge anyone if you have to oppotunity to go and wrestle in Japan then take it.

WF: How are you coming or how you came cope with the Japanese culture? For example, you aren’t allowed to clean your nose when you’re sitting at a table, is that right?

JM: I was told the culture is or was quite strong over there but maybe i was lucky as besides taking shoes before entering certain buildings it did not really affect me. The food was abit of shock on my first trip but by the second trip i loved the food.

WF: How did you get from „Jesse James“to „James Mason“. So why „Jesse James“ and now „Mason“? Is there a story behind it?

WF: We could see you were (among other things) competing in the 2004 TNA (World X-Cup). How do you remember the time and to be honest, was there no interest in a commitment on your part?

JM: This was a great time for me. Again not because of the wrestling but because i got to spend 2 weeks in the sun in Nashville having a great time. We only wrestled 2 times in the 2 weeks so there was alot of time to relax and enjoy myself. This is where i spent all my time with fellow wrestler Frankie Sloan. We become best friends that week and still are to this day. No i never had any planns to return to TNA. I have aleways had good regular work in the UK and have never had any planns to change that. I now supply the wrestling ring to most shows aswell as wrestling so this means i can make a good living out of wrestling by staying in this country.

WF: Your paths crossed with veterans and recognized professionals such as Doug Williams, Drew Mc Donald (RIP) and Robbie Brookside repeatedly. How do you remember these encounters and the people themselves?

JM: Iv have been very lucky to crossed paths with so many great wrestling from Uk and abroad. I still wrestle regular with Doug. I also was with Robbie before he left for the USA, also Drew aswell before he unfortunatle passed away. Any incounters with the above wrestlers have always been superb. I always fely like i especially great matches with Robbie. Real solid matches with very little to seperating us. I very much miss the type of matches we used to have. Some of my favorite matches now are against a welsh wrestler called Mean Tommy Dean. In my opionon he is one of the best heels/villains in UK wrestling.

WF: As noted before, Drew has lost his battle with cancer and the entire wrestling world was really sad and showed its condolence. Do you maybe have a story of Drew who also describes his character a little bit?

JM: when people ask about any stories about Drew it’s always hard to put them in writing. Drew was an Amazing person who i have shared some of my greatest time in the job with. Many story i and others have about Drew are not really something that i could write about on hear. But all im will say is, What ever you have heard about Drew it’s all true… A true character that is really missed around the wrestling world and an absolute brilliant wrestler. I belive i wrestled Drew more than most in his last 5/6 years and i so glad i did.

WF: There are rumors… You also have experience with competing under a mask. How hard is it to work with it? I can imagine that there is limited visibility and breathing more difficult…

JM: Rumors Rumors!!!! I can imagine it’s not easy to wrestle in a mask.

WF: Do you see the internet as a curse or a blessing for the biz?

JM: It’s a curse for me as im not very good with computers or internet. If i understood it then maybe i could get alot more use out of. I think its done alot for the job good and bad.

WF: What goals do you still have, would a major contract be interesting for you or do you feel well in the Indy area?

JM: My main goals in wrestling were to wrestle in Germany and Japan so im very pleased i have and also still wrestle ijn Germany. Others goals were to make a full time living out of wrestling which i have for 22 years. Wrestling in Uk is still good so i hope this contuines. As i get older i would like promote a few more shows and just continue to make a good living out of wrestling.

WF: Thanks for your time!