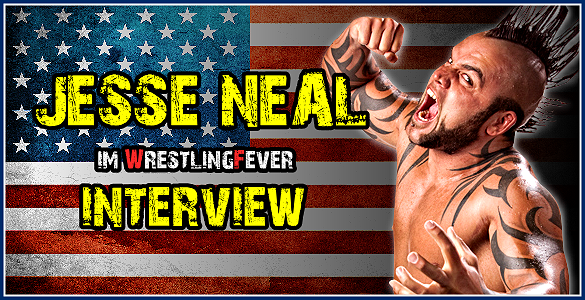 WF: We thank you very much for agreeing to do this interview, Jesse. How are you today and what are you doing these days?

WF: You retired in summer of 2015 meaning that you are not an active wrestler anymore. What drove you to make this decision and can one actually draw a line under this sport?

JN: I had a daughter and wanted to spend more time with her to see her grow up, but now I am back been wrestling in Canada and doing a lot of great matches up here going for my goal and one day make it back on tv but maybe this time WWE or even New Japan

WF: Before you started your wrestling career you were part of the US military. How long had it been a dream to become a pro wrestler?

JN:Oct 12, 2000 the bombing of the USS Cole changed my life forever and then on I knew I’m gonna be and stand up for something in this world and it was pro wrestling

WF: What made you try out the pro wrestling business, was there an „eye opening moment“, an event or a match?

JN:when my ship got bombed while in the navy I decided then I have to do something big in my life and we ll loved wrestling throwing PPV parties at my house every month and I always talked about it after that happened to all of us that day Oct 12, 2000 I knew I was gonna follow through with it and honor them and my journey is not over yet

WF: Did/Do you have idols, favorites?

WF: As we all know, you trained with of one the most successful tag teams – the Dudley Boyz. How do you recall especially the first sessions, were there moments when you wanted to quit?

JN:the first time I walked through the doors at team 3d Academy I met Bubba and then I knew right away tht this is it for me. There were times drivin home from practice where I thought I would never make it back there the next day but I got out of bed sore and broken, sucked it up and showed early ready to go

WF: What are your memories about the Dudleys, how hard is it to satisfy them?

JN:haha pretty hard. It has to be the tables matches the Dudley’s vs Ink Inc in the ECW arena, the Hammerstein ballroom were great
It was an honor to work with them

WF: Here in Germany, and presumably everywhere, you are mostly known through TNA Wrestling, how did you get into TNA?

JN:I owe everything to Bubba and Devon and of course my hard work and the will to never quit

WF: Did you like your bookings/storylines, did you enjoy it?

JN:some I did some I didn’t but I learned from it all and had a lot of fun either way

WF: How did it come to the team with Shannon Moore? Who got the idea, who invented the teamname etc.?

JN: It was Shannon and I that came up with Ink inc we thought hell we both have tattoos and Mohawks why not and we jelled well together out there. Just wish we had more time to be us out there.

WF: How do you remember your time with TNA, your feud with Rhyno which eventually ended with you being able to work with your old trainers (the Dudleys) again?

JN:over all it was an honor and I learned a lot to take the next steps I needed to in this biz. To be out there with the Dudley’s was a huge honor that I can’t even put into words. We have wrestled all over the place in tables matches that I will never forget

WF: Honestly, what is it like to work with the Nasty Boys? After Hogan and Bischoff were at TNA we didn´t see you anymore, then again aside your trainers. I imagine a tables match against the Nasty Boys is … „nasty“?

JN: ya definitely they were always willing to tear shit up with us
Unfortunately that story line didn’t last too long which most didn’t which sucked a lot of them had great potential of becoming something bigger then they were

WF: How did you met Hulk Hogan?

JN:when he came to TNA and he was very awesome to meet and work with. Always willing to help others
I believe he put me over one time on TNA when I faced Matt Morgan but got my name wrong. All well haha

WF: Vader is still considered a tough dog and fought hard battles in Japan as well as here in Europe. There are stories from wrestlers who came to an event and by reading the schedule they found out about their opponent. Allegedly many tried to get out of a fight with Vader. You had a match with him too. How do you remember the person, the in-ring character and the feedback afterwards?

JN:when I first found out I was facing Vader I was very excited but also in the back of my mind I’m in for a fight. But that is what I love about this biz. In ring with Vader is everything they say he is a hard hitting SOB and I wouldn’t have it any other way. Was an honor the parts I could remember haha I seem the light for a bit but back stage a very professional man

WF: Do you have an interesting and funny roadstory for us?

JN: Not any I could tell publicly, haha

WF: Thanks a lot for your time! All the best to and your family!

JN: thank u
And sorry that it took a bit to get back to u guys