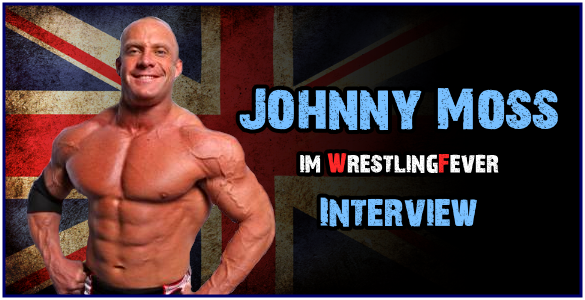 Thank you for taking some time to do this interview, Johnny! How are you currently doing?

JM: I’m doing great thanks, really busy which is how I like it! I like keeping active and get restless when I’m not doing anything!

You are working in the wrestling business for many years already. When and why did you start with training wrestling? Did your family and friends support your decision from the very beginning or were they sceptical towards first?

JM: I started training in 1997 at the Hammerlock school of Wrestling in Kent, which is actually a 400 mile round trip from where I live, I wasn’t driving back then either so I would travel overnight via buses and trains. It was a nightmare journey at times but I wanted to wrestle so bad I just got on with it. I was a huge wrestling fan from the age of 11, to the point of obsession! I collected every single magazine I could, I was fascinated with not just what was on TV but other promotions around the world and the history of the business too. I started to obtain video tapes from around the world in 1994 when I was 14, promotions like ECW, AAA, NJPW, AJPW, AJW..you name it I had it. This wet my appetite even more until I finally seen an advert in Powerslam Magazine for Hammerlock Wrestling Summer Camp in 97 and decided to pursue my dream. I think my parents were a little concerned at first, more so my mother, as I had constructed a home made ring on some land my dad owned and me and the local kids would get up to all sorts of craziness, I think they were hoping I’d grow out of it. However they helped me in the end and were supportive as they new I had a real passion for it.

JM: My first ever training session consisted of about 25 of us sat round the mats in a big Army barracks in St Mary’s Bay in Kent, we were then told to get in the middle, 2 at a time and try our best to force the other to submit or pin their shoulders to the mat…shoot on each other basically! I absolutely loved it, It was not what I was anticipating but I was fuelled on by the competitive nature of it and the science behind submission wrestling. From there we were shown various submission holds and ways of turning people onto their backs then we got on the mats and shot with each other again, attempting to use our new skills. We were then shown how to break our fall then gradually over the week we were shown more pro/show moves along with more submissions and throws. There was a huge emphasis on submission wrestling and this was due to head trainer Andre Baker and his love for this style. Andre was a strict coach but was fare too, we became very good friends and it’s a huge tragedy that he took his own life 5 years ago.

Do you remember your first official match?

JM: Yes, it was in Folkestone, Kent at the Leas Cliff Halls against Alan Johnson, I actually had it on video tape but have no idea where it’s at now. I don’t know if I could watch it now to be honest ha. Back then I was obsessed with high flying, so all I can remember about the match is doing a flip plancha and all sorts of moonsaults. I was wearing a horrible green and white singlet too and I wasn’t hitting the gym much the either, basically I looked like the shits ha

5. Let’s take a look into the future: Who is your dream opponent?
JM: I don’t think I have one to be honest. I would have loved to have wrestled Ric Flair, I remember when I worked a show in Wembley for TNA and Doug Williams was on with him, said to Doug before he went out ‚you lucky bastard‘ ha. Kurt Angle would good too. I wrestled Daniel Bryan at WXW Ambition a shoot style tournament, I’d like to wrestle him in a straight pro wrestling match.

Do you prefer single matches or do you enjoy tag team matches as well?

JM: I like them both to be honest, although the enjoyment level all depends on who’s on the other side of the ring if you know what I mean.

Tag Team is a good keyword… Your feud with Jon Ryan impressed many wXw fans. The foundation of your tag team “Reign of Terror” was really surprising! Why did you decided to establish this assemblage?

JM: Me and Jon go way back, we virtually started at the exact same time, I think I have wrestled Jon more times than any others opponents, we’ve wrestled each other in England, Ireland, Nashville, Florida, Holland, Belgium and of course Germany. I thought it was time we stopped kicking the shit out of each and go back to our Hammerlock Wrestling roots, so therefore the tag team was formed. We didn’t pick that name by the way, it was given to us.

So meanwhile you have opened your own wrestling training school, known as the „Johnny Moss School of Pro Wrestling“. Did a dream came true for you with opening this school?

JM: I have coached people for a long time, firstly at Hammerlock Wrestling then going round doing seminars for various schools, however I had never seriously thought about setting my own school up. The main reason being I didn’t think I would have the time, however I’m at a stage now where I’m looking to cut back on the number of shows I do, mainly to protect my elbow which I injured very badly many years ago. So I finally got myself a place last year and so far since opening in October I have had tremendous response with people travelling from all over to train here, places like Finland, Australia, France, Holland, Ireland. It’s also a great way for me to pay tribute to my former mentor Andre Baker and keep the memory of Hammerlock Wrestling alive that’s why I nicknamed it ‚The School of Hardknocks and Hammerlocks.

One big advantage of being a pro wrestler is definitely being able to travel the world. Which place you have been to, had impressed you the most and why?

JM: I have been very lucky during my career to have wrestled in over 20 different countries. I started travelling very early in my career, my first trip was to Charlotte North Carolina in the U.S as part of the NWA anniversary shows, we did them every year as Hammerlock was part of the NWA, those were great trips. I love travelling Overseas however the best place I’ve been may have been my most recent trip which was to Qatar.

You shortly had the honor to travel to Qatar, a country nobody here would associate wrestling with. How would you describe their wrestling scene? How different is it in comparison with the scene in Europe?

JM: Firstly, they have no wrestling scene there are no wrestlers in Qatar. The shows were put on by Qatar Pro Wrestling but consisted of mainly ex WWE guys along with a few guys from Europe, myself being one of them. The crowds are very responsive as they don’t see any live wrestling, the people themselves are very respectful too. Everybody is there to be part of the show and enjoy themselves, those are by far the best type of crowds to wrestle in front of. What makes those trips so special is the first class treatment from start to finish, were in a beautiful country with red hot weather and we are being treated like royalty…I don’t see how it could get any better.

You have lots of road trip experience. Can you share with us about one of your road trip memories?

JM: I’ve had tons of road trips, some more memorable than others. I always have a great time in Oberhausen, although once to my own expense as I lost my passport in a nightclub, which was a real nightmare when I got to the airport. I thought I was going to be stuck here ha. I was extremely drunk the night before though, I had stuck a candle in Jon Ryan’s eye in the pub and can vaguely remember Marty Scurll walking round mcdonalds with his pants round his ankles and 4am….great night ha! Similarly I hid poor Jon Ryan’s Passport once coming home from France. We were sat on the Bus ready to go thorough the Euro Tunnel and Jon was stood outside because the driver wouldn’t let him on. So as the bus set off and Jon’s sat there on the bench thinking ‚how the hell am I getting home?!‘ I stopped the bus and threw him his passport haha….it’s a wonder he still talks to me!

Are you enjoying any other sport besides wrestling?

JM: I’m not really a big sports fan to be honest, I enjoy watching UFC and have followed it since 1993, but that’s about it.

What is your favourite free time activity?

JM: What’s free time?! Ha…..I don’t have much time to myself really as I have a full time job, train twice a day (cardio at 04:30 then gym at 15:00) and have the wrestling school to run as well as work shows at the weekends. If I do have any free time I like to spend it with my Partner and our 3 children.

Your fans know you as a heel. Could you ever imagine having a face gimmick or is that a total no go for you?

JM: I have been a face hundreds of times, I’m probably a face in this country more than I am a heel. I would never refuse to be a face or a heel, that would be totally unprofessional. I am what the promotor on the night wants me to be, I don’t mind either.

Could you imagine to work for one of the biggest wrestling leagues, like WWE or TNA? Did you already had a tryout maybe?

JM: at this point I’m not interested in leaving and working for WWE, years ago my answer would have been totally different. However I have a great job 4 miles from my house, my wrestling gym is half a mile away, I get to wrestle all over the place and still have fun. Going to the Performance centre for less than half the money I make at home and leaving my kids does not appeal to me whatsoever.

How hard is it for you to be a pro wrestler and father and husband at the same time?

JM: it’s hard because like I said in one of my previous answers I don’t get a lot of free time, it’s just lucky that my job and the wrestling school are so close to my house so I see them every day pretty much. I am looking at picking my shows wisely over the next few years so I can spend more time with them. We are actually going on a family holiday tomorrow and I’ve promised I won’t try and find a gym while I’m there ha!

Thanks a lot again for doing this interview! How can an interested promoter book you?

JM: My pleasure, I’m sorry it took so long but I hope you readers have enjoyed it. To contact me mail me at mosswrestling@hotmail.com

As a conclusion, some personal words to your fans please

JM: Thank you all for taking the time to read this and I hope to see some of you at the shows. To keep up with what I’m doing follow me on twitter @Johnny_Moss or join the Johnny Moss School of Wrestling page on Facebook or please check out mosswrestling.com Thank you!