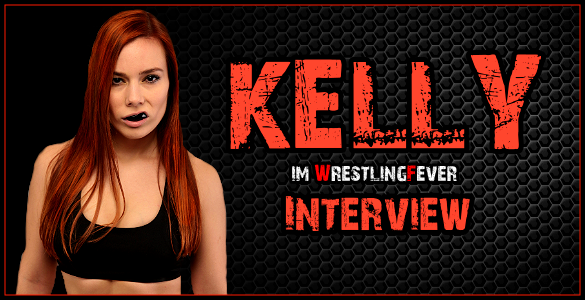 WF: Hello „Kelly“! First we want to thank you for taking the time to do this interview. How are you these days?

WF: We are dying to get to know you – When and how did you get into wrestling?

Kelly: I got into wrestling when I was 7 years old. My brother was watching some tapes, and I overlooked what he was watching.. then I saw the Brothers of Destruction making their entrance, and I was hooked for life.

In 2005, when I was 14yo, I was looking for a place to train (after searching for hours and hours where to train to go to WWE ahah), and I found a somewhat backyard wrestling federation. After a couple of months I discovered WP Wrestling Portugal, and never left. Despite starting my training at 14, I only count these last couple years, because the other ones were very playful trainings for me, only once a week, and I was in and out because of school, then college, and then work. This year I’m full-time focused on “making it”.

WF: What do your family and friends say about your decision to become a pro wrestler? Do they give support or do they criticize you? Parents are known to worry much…

Kelly: At first my family didn’t support me at all. I was forbidden to go train, and they insisted that my main focus should be getting a degree. But now that I am an adult, with a degree in Graphic Design, in which I work on, they let me pursue my dream! My friends were always very supportive.

WF: How do you recall your first training session? When and with whom was that?

Kelly: I recall my first training session in WP Wrestling Portugal. I was mesmerised, because I never saw an actual wrestling ring, and never stepped in one. It was so awesome! I remember that Bruno “Bammer” Brito (the head trainer) told me to take a bump there, and I almost died ahah.

WF: What can you tell us about wrestling in Portugal?

Kelly: Wrestling in Portugal is still very “underground”. There’s not many fans… but the ones we have, are loyal.

WF: What are the differences between Portuguese and German fans?

Kelly: German fans are VERY LOUD, which I love! I felt like a superstar when I went to wXw, the crowd was very hot, and it was only an academy show. In Portugal, the fans are shyer, with occasional loud cheers!

WF: Speaking of Germany, how did you like your stay here?

Kelly: It was the most awesome experience I had. I regret being there for only 1 week!

WF: Did you have time to learn about our country and people?

Kelly: Not much time, because it was only 1 week, and I had training the whole week.

WF: How did you like the training at the wXw Academy?

Kelly: I loved the academy. Training everyday was an spectacular experience, and the trainers are very, very good.

WF: Will you be back to Germany soon?

WF: You had a match at the „Academy-Show“ … What do you think about those rather small events

Kelly: For me, that show felt like a big event! It was very special, because it was my very first international match. And for the rest of the guys and girls, I think that they are a stepping stone to greater things. Those small events are needed.

WF: What are your goals in the squared circle?

Kelly: My main goal is to “make it”. I want to live, breath, eat, and sleep wrestling. I want to be a full-time wrestler with an amazing career. I’m going to make everything that is possible to make it.

WF: Do you have idols who may have influenced your style? Do you have a favorite (female) wrestler?

Kelly: Definitely Low Ki and Shibata. When I was growing up my favourite wrestler was Gail Kim, but nowadays I really admire Asuka, Charlotte and Toni Storm.

WF: Please explain how it came to your name „Kelly“?

Kelly: Simple: My real name is Raquel, but my family always called me “Quelinha”. The “Qu” in “Quelinha” is read like “K” so, for my wrestling name I chose to shorten that up to “Quel”, and then I came up with Kelly! Simple, uh?

WF: Looking back on the past five years how do you see the development of (European) women’s wrestling?

Kelly: Now women matter. In Europe they are given more chances than before, and the scene is growing lightning fast. Just yesterday we had a all-female main-event in PROGRESS, with Toni Storm, Jinny and Laura DiMatteo. And that’s amazing. That’s really a progress, no pun intended.

WF: Do you watch other wrestling promotions via tv or internet? Which one interests you most?

Kelly: Besides WWE, I watch NJPW, wXw, and PROGRESS.

WF: Which country would you like to perform in /return to?

Kelly: I really want to go back to Germany, and I’d love to perform in the UK. Fingers crossed for both.

WF: Are you active on social networking sites?

Kelly: You can all follow me and check my amazing photos and posts at KellyWrestling on facebook/instagram, and read my amazing tweets at @Kelly_WP.

WF: How can you be booked?

Kelly: Easy, peasy: just leave a message on facebook.com/KellyWrestling. Did you see how easy it was? Now book me! 😀

WF: Do you already sell merchandise or is something planned?

Kelly: Not yet, but since I’m a designer I’m working on that.

Kelly: Live events, definitely. But don’t be afraid to hit me up on my social media accounts, I love fan interaction!

WF: Are you rather heel or babyface?

Kelly: I’ve only worked babyface. But I think I have a heel inside me swell.

Kelly: For all the promoters around the world, please give up and comers a chance. Speaking in my behalf, I won’t disappoint. I’m young, fun, and throw amazing kicks and I do have given a mean germansuplex! But, in all seriousness, there’s a lot of girls with talent who just want a chance, and I’m one of them. Contact me, and I’ll make your show a little more interesting.
And you fans, thank you for being with me. Being practically unknown and being supported is very meaningful to me. I won’t disappoint you, and we will grow together!

WF: Thank you so much for this interview and it would be great if we get another opportunity to talk again. All the best for your future!

Kelly: Thank you so much for this amazing interview! I really hope people got to know me, and i can’t wait to talk to you again in the near future.