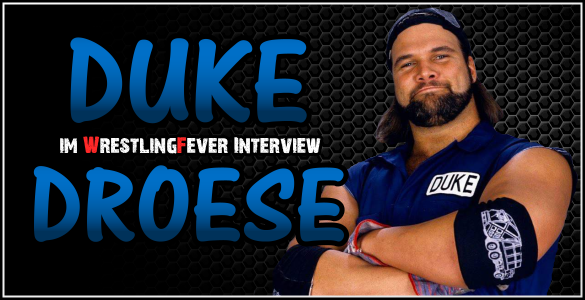 WF: Mike, thank you for doing this interview with me!

M: Thank you for inviting me.

WF: You recently attended a few live podcasts of my colleagues and have a podcast youself. What role does wrestling still play in your life?

M: I still talk about my past in wrestling quite a bit. I enjoy interacting with the new, younger fans as well.

WF: What is your podcast about and how often do you stream it?

M: „The Road To RecoveryPodcast“. We talk to people who have overcome great difficulties in their lives.

WF: Social media for many is a curse and a blessing, what is your take on this, especially thinking of the possibilities and modern technology – can you keep up or is it difiicult at times?

M: Social Media has been great for me. It is a way to connect with more fans faster.

WF: Your ‚Dumpster‘ gimmick was not created by WWE, is that right?
Long before there was ‚The G-Man‘. Do you remember where the gimmick/the idea originated – who came up with it?

M: I created The Garbage Man Rocco Gibralta back in Florida when I lived and wrestled there before WWF.

WF: Your active time was one of colourful characters, many long-time fans seriously miss that today. What are your thoughts on the development to todays wrestling, do you like the current product (shows, characters)?

WF: Back then they recorded VHS tapes as advertisement to give to promoters. Do you know how many you sent? In another interview you mentioned that you took notes on moves from tapes to put into your repertoire?

M: Yes me and my brother John created a promo tape that I only gave to two people, George the animal Steele and Vince McMahon.

M: I had to get Luna out of jail in Canada for beating up a group of college kids.

WF: The 90s were the best time for wrestling fans. ‚The Kliq‘ lead the progam, which was interesting to the fans but a tough time for many of your colleagues to compete against them (even backstage). How do you remember that time, the group and especially Scott Hall?

M: Scott was a nice guy by himself. But, in the Kliq he could be an arrogant asshole.

WF: 1-2-3 Kid (X-Pac) allegedly made a mess in his pants after catching a kick from you. That story is so unbelievable that I have to ask you directly. What happend – I heard that Shawn Michaels took your side on this?

M:I don’t think I caused him to shit his pants, but the rest of that story was true.

WF: Today kayfabe almost doesn´t exist anymore, regrettably because it kind of takes the magic out of it (at least for me). It was different back then! Please tell us about the story including Bob Backlund in a bar having a glas of milk…

M: After I wrestled Bob in the arena, I walked up to him in the bar to say hello. He started to scream at me to get away from him. He still practiced Kayfabe when no one else did.

WF: You made no secret about you having a problem with addiction in the past, did that lead to your release from WWE and … is there still contact with WWE today?

M: My drug use made it difficult for me to stay. I was very angry and the drugs made it worse. I still occasionally talk to WWE people.

WF: Brakkus was a German talent, is it true that you were a role model for him by being shown your power moves via video tape? How do you remember him and that time? Unfortunately we didn´t see much of him…

M: The office showed him tapes of me to learn how to do power moves. Mark Henry also watched the tapes of me.

WF: You used to have nice, long hair which you lost in a match. What made you get a haircut, who had the idea?

M: The angle with Triple H we first cut the hais. As I got older I have less and less hair so I shave my head now.

WF: A few years back you were sentenced to prison time which you served. How did it come to that and does it still influence your life?

M: I never served any prison time. I had to complete a very difficult drug court program was part of my plea deal.

WF: 20 years ago (at Wrestlemania X-7) you once more appeared during the ‚Gimmick Battle Royal‘. Did they plan to offer you a new contract or was that a one time thing? How do you remember this ‚comeback‘?

M:It was only a one time thing. I was still on drugs and in no shape to wrestle.

WF: Mike, what are you doing today and how are you?

M: I work for the drug court program that I graduated from, helping others get off drugs and stay off.

WF: Do you have a favorite match, a favorite feud or something alike from your time with WWE?

M:I really enjoyed working with Triple H. It was fun.

WF: You lost one of your legs, what happened and how are you today?

M: I had an old injury that got infected so I had to lose the foot. I was on drugs at that time too and didn’t take care of my foot.

WF: It is rare that someone speaks so openly about themselves even though their life was particularly hard at times. Thank you so much for your time!