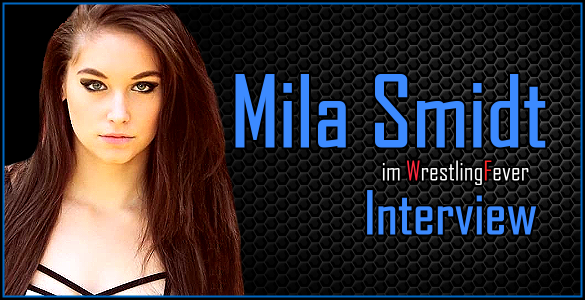 WF: Hey Mila! Thank you for taking the time. How is your knee and how are you?

M: Hello! You’re welcome, I’m really happy to answer to your questions. My knee is good thank you, I just came back in the ring on September so I still need to be careful but I can fight so I’m feeling great!

WF: When and how did you get into wrestling?

WF: Did you family and friends support your decission or were they rather sceptic?

M: A lot of guys in my family are amateur wrestlers so it was natural for me to start wrestling. My mom was really scared at first to see her baby girl going to wrestling’s world but I worked hard and proved her that I was tough enough to be on the mat/ring and now she is supporting me at 100%. My friends support me since day one too, they all know how much I love wrestling.

WF: Who trained you so far? Can you still recall your first training sessions?

M: Well, I’ve had several trainers… The first was Pierre „Booster“ Fontaine from ICWA in France, then I was trained by Marc Mercier from FFCP in France too. But my mentor and the man who’s following, training and supporting me since day one is Tom La Ruffa (Former WWE and TNA Superstar).

Yes sure I remember my first training sessions ahah, what a souvenir!! It was in ICWA with Booster. I thought I was completely prepared thanks to amateur wrestling but in fact, i wasn’t ready for all the back falls I took during these first trainings. Big headache at night before going to bed ahah !!

WF: When and against who did you have your debut?

M: My first match ever was in july 2016 against a french female wrestler , Kaleah Black.

WF: What are your thoughts on your first match? Were you nervous? Satisfied? How did you feel the ‚day after‘?

M: Well, it was a strange feeling because on one hand I was really nervous to have my first match, it was scary to see all these people looking at me but on the other hand I was super excited and I really wanted tob e in the ring. The day after, I was happy to finally entered into pro wrestling’s world. I felt like it was the beginning of something! I knew in this moment that wrestling was the only thing I really wanted to do in my life !

WF: Who came up with your ringname? Does it have a story?

M: My ring name is a tribute tot he women in my family. Mila was the last new born and Smidt is my mom’s family name. She is the strongest woman I know and a true model in my life !

WF: Of course a very current topic: your participation in the WWE tryout in Cologne/Germany. What can you tel us about it?

M: WWE tryouts were an incredible experience ! It was physically and mentally very intense, we had a lot of trainings in the ring and an outdoor training too. I’ve learned a lot during this week, all the trainers were amazing. It is something I will never forget and it’s motivating me to work even harder because I really want to go back there! I also loved this week because I met awesome people there from different countries. We didn’t know each other at the beginning of the week but we were supporting each other everyday, during every exersise and at the end we became like a family. I didn’t want to go back home to be honnest because this ist he way of life I want !

WF: How did you like the main show in the evening in the Lanxess arena?

M: The show was really great, I enjoyed watching every match. It was impressive and I was really happy to be there. I felt like I really wanted to be in the ring with them too !!

WF: What goals do you have with pro wrestling, what do you want to achieve?

M: I want to travel the world and wrestle everywhere. And most of everything, I want WWE .

WF: Do you have idols in the ring?

M: Yes, when I was I dreamed to be like Lita, Victoria or Michelle Mccool, they were the best for me !

WF: What do you think about intergender and/or mixed tag team matches?

M: I like these matches because it’s a moment when women can show people that we work as hard as the guys and we can also do incredible things in the ring. I already have matches against guys and I won ahah it’s such a great feeling !

WF: Do you have a ‚dream opponent‘ you want to fight above all others?

M: I have several dream matches but Victoria is definetely the one I would dream to face in the ring because she ist he woman who made me want to become a professional wrestler.

WF: I just saw your match against Shanna and I think it was pretty tough (and really good). How did you feel the day after?

M: Yes, my match with Shanna was really intense, she is a tough competitor and it was a big challenge form e in my young career. We gave everything we’ve got, that’s why as you could see, I’ve had a lot of bruises, my neck was hurting really bad but the day after I felt very honored to have been able to share the ring with such an amazing woman wrestler. Even if I loosed this match, it was a big moment. Now I work harder to get my revanche, I’m not done yet !

WF: During your short career you performed for BEW in England. How did you like the island? Will the British fans be able to see you against soon?

M: Wrestling is England was awesome! I did my 3rd match there and I completely fell in love with this country. The crowd was so great I can’t wait to come back there. Yes I will wrestle again in BEW in England on february (2019). Hope you’re ready guys, I’m coming back !!

WF: Could you imagine wrestling in Germany any time soon?

WF: Do you travel alone or with company?

M: Depends on the show but most of the time I travel alone.

WF: Our community loves funny or thrilling road stories. Do you have one for us?

M. So I have one for you… At first I thought it was the baddest morning of my life but now I can’t stop laughing about this.
I needed to take a train very early in the morning so I put my alarm clock before sleeping (like everybody, right?) but it didn’t work on the morning and I woke up later than I should ! My wrestling’s bag wasn’t done and I only had 10 minutes to do everything! I never woke up as fast to my bed ahah! When I was outside, I realized that there were no more buses which could drive me tot he train station which was far fromm y house. So I had to run fromm y house tot he train station, a 25 minutes sprint… I’ve never run that fast in my life before !! At the end I was sweating as if I did a wrestling training, out of breath … but on time form y train! My face was so red and I was so sweating, everybody in the train was looking at me ahahah what a crazy morning !!

WF: Fan contact is very important. Which way do you prefer, social media or live events?

M: I love seeing my fans in real during live events, it’s important for me to meet in real life all the people who are following and supporting me on social medias. I really enjoy every moment with my fans !

WF: Where can #TeamMila-members find you on social networks?

M: They can contact me on social networks of course and also by e-mail ! ?

WF: Do you already have merchandise like shirts or promo photos? Anything planned?

M: I have promo photos now and I will start to work soon on some t-shirts !

WF: We would like to give you the platform to speak freely. A challenge to your rivals, a few words for your fans, whatever you want.

M: Well… my biggest rival in France is Anastasia, I beat her last week, I was the first and still the only woman who is able to put a suplex a her, and that’s how I won ! She was mad and asked a rematch and of course I accepted ! So Anastasia, I hope you’re ready to take some flying lessons !

For my TEAM, you can catch me in Pakistan from the 5th tot he 10th of december, I will be in Belgium on the 13th of january and in France on the 20th ! UK I’m coming in february ! Stay in touch on social networks fort he exact dates. Thank you for you support, you’re the best team ever !!

WF: Thank you very much for this great and open interview, Mila, and we would like to have you as a guest again. All the best and stay safe!

M: My pleasure ! Thank you for your work ! I hope we will meet again. Thank you very much !
See you ! xoxo