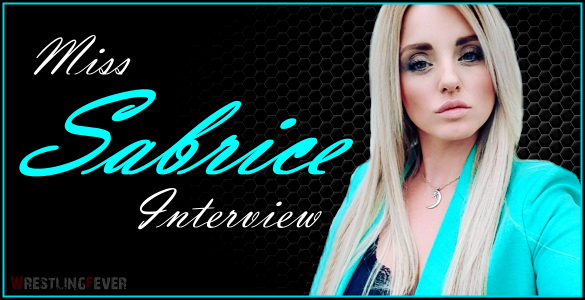 There has been a new wrestling promoter in the UK for some time now, who is probably the only female promoter so far, who did not really have anything to do with wrestling not so long ago and now organizes it regularly. We introduce you to the lady, Miss Sabrice, a little closer, look behind the scenes and the future, which could also affect the German fans.
________________________

S: Hi I am well thank you. Very busy but can’t complain.

WF: You have an interesting story that I would like to briefly discuss. In fact, you had played hockey and allegedly they even wanted to win you for the Olympic team, is that true (how long did you play, why did the Olympics fail)?

S: Yes, I did play hockey. I played for the county I live in and travelled all around the country to play. I also played for local womens team and mixed team (men and women). Basically the scouts travel around and we heard they would be at some of our up and coming matches. I however picked up an injury during training and injured my Achilles tendon so was on crutches. So unfortunately I was unable to participate. I then came back into training and played for my local club. The goal keeper kicked the ball up and it hit me in the face and needed stitches. After a few near misses after this I decided to not continue and concentrated on my career.

WF: Incredible! What do you do for a living – saving lives?

S: I work with premature and sick babies. People ask how I do my job, I know this sounds crazy, but I love it. Especially seeing the baby go home with their families where they belong.

WF: You are a proud woman, mother and now also a promoter – as far as I know, the only female in the UK. How did you get into wrestling?

S: Yes so I hear that could possibly be the only female promoter in the UK. Which is crazy really. Well I met Aaron Sharp and we started talking. Before we knew it we ended up together. I went along and watched him in a few of the shows he was on. In our area there is nothing like a wrestling school or promotion. Kids in the area love wrestling. So with Aaron getting older now (sorry Aaron) he can’t wrestle forever, especially with his leg injury. With his knoweldge and experience he gained over the years it made sense for him to give some of that back. Hence how this all came about. We asked on social media if anyone would be interested and the response was
overwhelming. So that’s how LWP was formed. We are starting to build a regular fan base for our shows which is great in such a short space of time. I always believe you have to give to receive.

WF: How are you accepted as a woman and a promoter?

S: I have been accepted really well so far. I speak with some trainers and promoters regularly. It’s about all working together and having no egos.

WF: And now you are a promoter, how did that come about? Suddenly you are communicating with talents and colleagues around the world and also have a lot to do – right?

S: It came about very quick really. An idea soon became reality in no time at all. There is alot to do. I didn’t realise just how much was involved but finally getting my head around it all. It’s nice meeting talent from around the world and getting to know them. Yes we all have a job to do, so to speak, but again I am proud of everyone that I speak to and that steps through them ropes or doors.

WF: You became an promoter overnight, how quickly do you find yourself there, numbers, facts, the biz is something special and you have to find out a lot first ?!

S: Like ive said it all happened so quick. I haven’t actually had time to sit and think about it all really. I just go with the flow.

WF: How was “LWP” generally received in the UK, also by other promoters?

S: Yeah, we have been received quite well by other promoters on a whole. You have the rare few that has something negative to say but I’m not interested. I just concentrate on what we are doing here at LWP. We will and have worked with other promoters and will continue to do so. There is no jealousy here.

WF: What has changed for you and what influence does wrestling have in your free time?

S: My free time, over the summer especially, has all been all about wrestling with shows, festivals, meetings etc. I am going to make time for other things other than wrestling though. When that will be, I don’t know but I will. Ha.

WF: International cooperation is important, with talent and other leagues, such as the IPW here. How important is the German market for you and your school?

S: We have a very good relationship with IPW in Germany. It’s very important to us that German followers are kept updated with our news as we have future plans to bring some of
Germany’s top stars over here to the UK for LWP.

WF: As I have seen, you now have a new sponsor, how important are these sponsors and
partners for you?

S: Yes we have a new sponsor which is Elite Fit. We can’t thank them enough for everything that they have done so far on the lines of promoting and working together
with us. Even business’s putting our logo on their vans for free to advertise us as like what we are doing. For that we are very grateful for too. We have alot going on in the background regarding sponsors… but shhh, all will be revealed soon.

WF: Even if it is a long way off, how realistic do you see an international tour or an „LWP“ event abroad?

S: With how quick things are moving for us, never say never! We are being offered opportunities all the time which is great but hopefully it will be something we can sort out in the future.

WF: How did the name „LWP“ come about and were there other considerations and suggestions that you can name?

S: Loads of names were thrown about like Spartan wrestling, extreme wrestling, things like that. Nothing really stood out. Just didn’t feel right. With Aaron being the head coach at the training academy it made sense to encorprate what he is know as Lion …so then we were working with Lion being part of the name … Lion Wrestling Promotions came up and that was it, it just stuck. Plus a lion is associated with many sports in England such as England football, cricket teams etc. So quite fitting really.

WF: Sabrice, we wish you every success, stay healthy and thank you very much!

S: Thank you for having me, it’s been a pleasure.