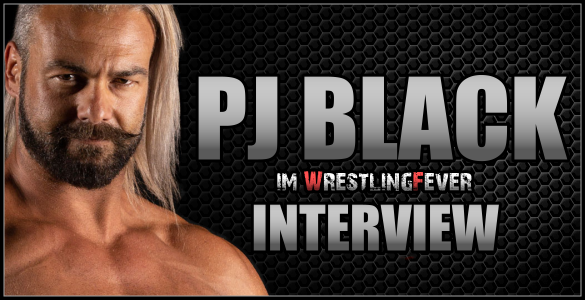 WF: Thank you for doing this interview, we hope you are doing good?

WF: Your father also was a wrestler and promoter – was it an obvious choice for you to that too? Your debut was at the age of only 16, did you ever consider something else (job education or the like)?

PJ: Ive always wanted to be a wrestler since I was 8. I understood that it was risky since nobody from Africa made it big so I did go to college. I have a masters degree in sports science and nutrition. Im finishing up my PHD I always wanted to be a physiotherapist and help other athletes.

WF: Later you trained and worked in England. How did it come to you training there?

PJ: I left RSA when my dad got shot in 1999. So I backpacked through UK and settled in London for 5 years where I went to College. So I trained and wrestled on weekends.

WF: Years later you signed your contract with WWE, as the first South African wrestler ever. How did you get your contract, was there a tryout or a talent scout or something?

PJ: I had a try out in Florida. They really liked me but it took them almost a year to get work papers for me.

WF: Nexus is a stable fans still like to think back to. How do you remember that time?

PJ: Was a great time with some great people and very memorable indeed. Everything in wrestling is borrowed or recycled. Hardly ever something very unique comes along so it was rad being part of something so groundbreaking.

WF: Is there a story from that time you can tell us? In my opinion the whole thing ended way too fast. There was much more potential in the stories against Cena and co.

PJ: Yes ended way too quick. Maybe we should’ve played it different but it is what it is and we cant change a thing now.

WF: What was it like to work with CM Punk as the Nexus leader and in general?

PJ: I liked him. Nobody else did. He’s a very interesting/controversial fella for sure.

WF: What is your opinion on WWEs ‚NXT‘ product, do you follow the shows and how do you like it compared to WWE RAW or Smackdown?

PJ: I dont watch any TV at all. I’ll catch a PPV every once in a while if one of my friends are working. I like the product a lot. Its come a long way from being a develop territory and developed into its own brand. I just dont know any of the kids there. Maybe 1 or 2 stands out the rest still needs to find themselves. I know this is my own opinion and probably not shared by others. But I think I know better than most as ive been doing this for 23 years.

WF: You were multiple times WWE tag team champion and held the titles with other promotion as well. Is there a highlight for you, a title victory that stands out (which one and why)?

PJ: Not really. I enjoy doing new things that ive never done before. All dream matches and title matches are awesome memories its hard to pick just one.

WF: Unfortunately you were released in 2015, was there ever the thought of or talk about a comeback? WWE allegedly works on an episode of ‚Untold‘ about the Nexus stable?!

PJ: I wasn’t released. I quit. Theres a huge difference. I left because I just dont fit in there. I love freedom too much. This is my art and I need to be able to express myself freely to be true to myself. Never say Never but not very likely giving the state of things there. Yes they’ve reached out to some guys for this Nexus piece but only 1 or 2 guys are able to do it because of contract obligations.

WF: You also were a guest in Germany and held one of the oldest GWF titles (Berlin Championship). What are your memories about the GWF, Germany and will you be back one day?

PJ: Oh yes I loved all my matches and time there. I actually lived in Berlin for a month while I was champion and it was great memories and I definitely 100% want to go back some day. There were some talks but then the world shut down.

WF: Lucha Underground was a complete change of pace from what fans are used to. In retrospect, besides of it being a way to make money, what are your thoughts on this product?

PJ: It was a great product and I had probably the best time of my life shooing this. It was a TV show with some wrestling on. Not a wrestling show so thats why it stood out so much. We made wrestling fans out of people who has never seen wrestling that found the show on Netflix. So to be a part of something that special was incredible and will sadly never ever be duplicated.

WF: Maybe it wasn´t the time – do you think that this kind of wrestling has a long-term chance, if so, in YOUR opinion what does the product need to stay in business?

PJ: Well as a wrestling show it’ll never work. As we can see around the world many have tried. The only way it can work again is if its not run by a wreslting company but a Hollywood TV company. That ship has long sailed since MGM and Elrey Network cant work out their issues. Also having AAA owners involved was a huge mistake.

WF: RoH is your current employer and a well liked promotion with the fans which shines through good wrestling. Many superstars are or came from there. Do you have matches or opponents which you keep in a special place in your heart? (Which ones?)

PJ: I love this roster. Guys like Bandido, Flip Gordon, Dragon Lee, Rey Horus, Flamita are the future of our sport. Ive had 2 matches against Bandido that has to be some of my fave ive done here. Recently wrestled Flip (that match will air in June/July). And I cant wait to have singles matches with the rest ive mentioned but also the whole roster. We have so many talented guy I can list the whole roster here actually.

WF: You already had two accidents doing BASE jumping. What happend and how bad were the injuries?

PJ: I have steel plates and screws in my right leg and right ring finger. I have titanium in my left leg. It was pretty bad both times they said I won’t be able to ever wrestle again. But im living proof that you can always heal yourself and that the mind and meditation and breathing work actually works and heals. And having a strong mind far outweighs anything a doctor will ever tell you..

WF: How are you today, did it heal properly or does it limit your movement?

PJ: Im in the best shape of my life. Maybe long term It might effect me but only if I let it mentally. They body is the most highly advanced technology on this planet and it can do whatever you set your mind too. So no it doesn’t limit me. Limits are only in you head.

WF: Is BASE jumping or other extreme sports still an option for you, which other sports do you play/practice?

PJ: Yes I still BASE jump. I love skydiving. I love love flying my Wingsuits. Recently started Paragliding. I ride motorcycles (track and dirt). I dont consider myself an adrenaline junky. These things calm me down from a crazy life. Its like meditation to me.

WF: How restricted is your life now during current the Corona pandemic, what is the situation in South Africa?

PJ: I live in Los Angeles so life has been slightly restricted but hasn’t stopped me from living life like I usually do. It has given me some extra time to work on other projects and finish up some studies and a book im working on so its been great for productivity really.

WF: Thank you so much PJ, stay safe and healthy! 😊

PJ: Thanks for having me!