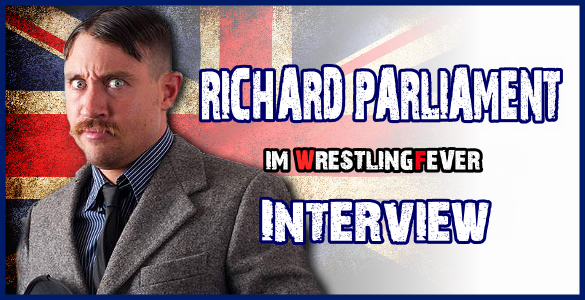 WF: Thank you Richard, for the spontaneous interview commitment!

RP: No problem, I always have time to answer questions.

WF: Currently we can see you participating in British Boot Camp 2, but we’ll get to this point later. You have an interesting name, can you tell us how you came to this?

RP: My name Is Richard Parliament, the Parliament part of the name portrays the fact that I am the UKs only Wrestler and Politician. I campaign up and down my country, touring the curcuit on my quest to become Prime Minister. This allows for me to relay my policies to a large demographic. Yeeaahhhhhhh!!!!!!!!!

WF: You are now a pro wrestler since 2009? – What were the reasons you started to start training?

RP: I started training in 2007 actually, 2009 was the point when I started recieving multiple bookings a week, so I could class myself as a proper professional wrestler rather than a trainee. The idea of Prowrestling myself was initially put in my head by watching WWE Tough Enough. I watched it and thought to myself I can do that! Then in 2007 a wrestling school opened in my area and the rest was history. Its nice to have gone full circle, initially being inspired to train by watching the likes of Al Snow train people on tough enough and then be featured on a reality show myself with Al Snow, 13 years later!

WF: In Germany you are still relatively unknown. How can you describe your wrestling character & style?

RP: I am the UKs only Wrestler and Politician, I am a firm believer in education, education, education! As their is always room for improvement. I am a big mouth politician, who always wants the microphone. I am not the biggest toughest man in the world, nor am I the smallest speediest high flyer. But I like to feel I bring a bit of everything to the table and will do anything to win and be any means neccessary!

WF: Are you someone who still follow the mainstream products or do you like the indy scene ?

RP: I follow the mainstream product and like to keep up to date with the Indy Scene. My only problem with wrestling is not enough wrestlers have uniqe selling points, you generally have your big muscular men or your kicky, flippy flyers. I like wrestlers who stand out, for example I have been thoroughly entertained by Bray Wyatt as the act is different.

WF: In Europe there are many legends, do you have any role models?

RP: Out of European Legends the most inspiring for me is Mick Mcmanus. The man did everything right as a villian, many years before others did. He was the perfect bad guy, the man practically invented the heel role and even though it was over 30 years ago his catchphrases are still shouted by the British fans today. ‚You Shut up!‘, ‚Watch the ears‘. Its the little things like catch phrases, the way you look, dress etc. That make you remembered.

WF: Who trained you and how did you build contact to your coach?

RP: I started training at a wrestling school local to me, then moved onto other wrestling schools. I wrestled on academy shows and holiday camp shows and slowly worked my way up. I was just constantly trying to make contacts and absorb knowledge.

WF: Your goal seems to be clear – you want to climb the ladder of success and do not stop till you reach the top- that’s why you applied for a job at TNA. Is it your first TV project?

RP: I have done a little bit of wrestling on the BBC ONE show, however TNA British Bootcamp has been the first wrestling focused TV show I have been a part of. For myself I just saw British Bootcamp being advertised, so I applied as I knew it would give me an opportunity to show case what I can do.

WF: Do you like watching your own matches on DVD again and how critical you are in relation to yourself?

WF: Currently – we read it again and again – TNA doesn’t seem to be the first place to work. What is your personal opinion of newsletters as Dave Meltzer & Co.?

RP: TNA Wrestling is a massive step up for any indy performer. It allows us a huge spot light to show case what we can do, to an extremely large audience.

WF: In Boot Camp, the judges have decided to let all candidates pass to be part of the TNA show in the UK. Certainly a great honor to compete for you with supporters from your home behind your back…. What can you tell us about this feeling?

RP: All Candidates did not pass through to go be on the TNA York Hall show, so I am extremely thankful for the spot I have been presented with. TNA Management selected about 60 individuals for auditions over 3 weeks and put there 16 favourites through to the UK finals. The spotlight TNA have put on myself along with British Wrestling is absolutely fantastic and can only lead to good things for all parties involved. Its great that the hardwork in which so many Brits have put in other the years is finally being seen by a wider audience.

WF: Of course you are not allowed to talk about things that were still on broadcast. Suppose it works with TNA and you get a contract – what goals do you have?

RP: My goal is always the same to be as good as I possibly can and to always try and stand out and be different from the rest of the pack.

WF: Please tell us some countries where you absolutely want to wrestle?

RP: I have wrestled in Germany and the United States and would love to return to both countries. I would like to wrestle in as many places as I can.

WF: A funny story is always welcome by the fans … Can you tell us one?

RP: I have many ridiculous road stories and have many skeletons in my closet like most Politicians. However everyone I can think of, I am going to keep to myself as would not want to get anyone in trouble haha.

WF: Thanks for taking your time! If someone would like to book you, how can he contact you?