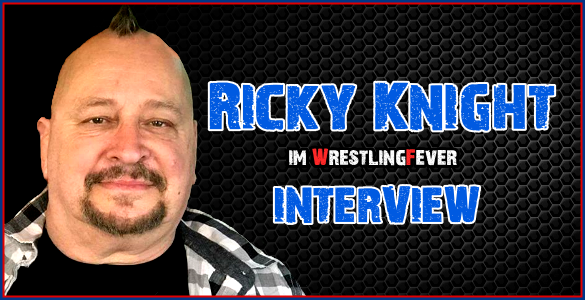 WF: First off let us thank you for agreeing to this interview. We hope you are well!

WF: You are a British legend also known as “Rowdy“. How did you get that nickname and why did you choose to be called “Knight“?

RN: Knight comes from my favourite singer Gladys Knight and i started as ‚Rebel Rick Knight‘ but MCs kept calling me ‚Rowdy‘ and it stuck.

WF: There is a lot of stuff about you on the internet but no actual history. So let´s start at the beginning. You and your wife are wrestlers and promoters. How did you get into pro wrestling? You were trained by Jimmy Ocean who is still an active referee. Is that correct?

RN: I was trained by Jimmy Ocean in the 80s in Norwich. I started training Saraya in the early 90s. I met Jimmy when i was a bouncer at a ‚Kings Lynn‘ night club. We quickly became good buddies and he started training me within weeks .

WF: Jimmy fought his ACTUAL last match against you. How do you remember it and how emotional is it for a friend, colleague and mentor?

RN: Jimmy is more like a brother to me after so many years on the road together. I have had some real great matches with him, wrestling cage, ladder, hardcore. We always gelled and produced. I will always respect him as one of the best.

WF: He recently joined forces with the Nasty Boys against ‚Insane Flock‘ at IPW in Germany. Your sons already appeared at IPW as well as your wife. Will you be back after 2017, maybe with IPW?

RN: To be honest I had to pull out due to injury but Jimmy went and loved every minute. But yes, i really hope to be back in Germany again very soon.

WF: Would you fight another match? I know you are already past 60 years of age but I´m sure you can still feel the urge from time to time?

RN: I still wrestle full time. Just come off a run of 8 matches in 6 days. This man is not for retiring, tried it once but did not like it. I will carry on as long as i still get a crowd reaction.

WF: Ricky, let me be honest with no disrespect: You do not look like the typical top athlete.
Did you know all along that you will be a brawler? Did you always have this physique?

RN: No when I started out I was 170 pounds and a flyer, had the 6 pack all the deal. I got a chance to work in Germany and it was for heavyweights then. So I put on 5 stones in six months and went to work there, never took it off since. But I´ve always been a fit fatty, held my own with anyone in that ring and I still put in training till this day.

WF: Did you meet your wife through wrestling? Can you tell us about it? Did she already wrestle herself or was it ‚your fault‘ that she started?

RN: I was wrestling on a holiday camp in 1990 when i met my lovely lady. She was a chef and quickly became part of our travelling team, doing all the rubbish jobs. After a few months we debuted her as a valet. She stormed the 1000 in attendance and us as a team. She was sensational and never looked back. She was best valet ever in UK, imo. Not long later after teaching her on a daily basis she debuted as a wrestler in 1991 I believe.

WF: Your wife is the loud part of your family and she names you the quiet part, with a vision.
Since the 90s you are in charge of a wrestling school and hold shows yourself. How difficult was it for you to get established with the school and the shows?

RN: It’s very hard for WAW as we are not an internet company. We run good story lines and family friendly shows. So we are not so in the public eye. We have built up a good reputation by word of mouth and years of hard work.

WF: How did it come to the foundation of “WAW“ – Do you head this promotion alone?

RN: Myself, Jimmy O and Saraya started WAW back in 1993. Jimmy left 3 years later to go into music business. WAW came from and old company Jackie Pallo had years earlier. He was one of my wrestling heroes growing up.

WF: Your biography also has a black spot which I discussed with you in our preliminary talk. You were arrested which is no secret. What happend back then and what did you learn from it?

RN: Yes it is no secret i was a bad guy when I was young. Did 8 years in jail before my mid 20s. Most of my charges were violence and i was a real idiot jack the lad. But when i met my wife it all changed and it’s all down to her.

WF: How often do fans or other people try to compete with wrestlers? Did you experience it yourself?

RN: Many times. Usually the idiots would regret their actions quite quickly.

WF: Which possibillities did you have to get a professional training? Nowadays there are schools almost everywhere but surely not when you started…

RN: I was trained on my living room floor mostly. Only in the ring when promoter came to Norwich twice a month. We were one of first to start a school.

WF: What made you become a pro wrestler? I´m sure back then it didn´t exactly pay the bills, right?

RN: I gave up a successful business to go into wrestling, tbh I had a good lifestyle but was never happy. Wrestling gave me something money never could happiness and contentment.

WF: How long did it take for you to have your first match in front of an audience? Who did you fight against and how do you remember it today?

RN: After 18 months training I debuted at Wells Norfolk against Jimmy Ocean. I did 4 rounds and was gassed to hell but loved it and had a great following there. I was buzzing still am.

WF: Your kids also chose an in-ring career and are succesful wrestlers. Was this a dream of yours and your wife or did they ‚have a choice‘?

RN: They all had the choice. But being a wrestling family it was always on the cards for them to follow us into the industry but saying that; I am so proud of them.

WF: Three out of four kids step in the ring, is that correct? Being father and trainer were you harder or easier on your kids as trainees, maybe because of the name the kids carry?

WF: How proud are you to see your daughter on international television? Do you think that Zak will get a chance too? The focus already was on your son…

RN: I’m proud to death of her. She is a star and has worked very hard. Zak is now a partner in WAW wrestles over 200 times a year here and is content in life if the call actually came who knows.

WF: On an episode of “Total Divas“ you argued against Paige getting a tattoo, via phone. There are quite a few now. The newest ones seem to be on her hands. What do you think of that (now)? Did you say anything about it?

RN: I dont like women with tattoos to be honest even though my wife has some and I had them. Just an old fashion view of mine but i am 65 and I aint going to change now.

WF: You are retired now, is it possible to actually fully retire and how hard do you think it is for your daughter to possibly never have another match again? What does pro wrestling mean to your lifes, in general?

RN: Actually, as I said earlier, I am not retired and still wrestling quite a busy schedule for my age. I did retire in 2014 and hated it. When I went into a bad depression I was advised by my wife and family to go back in the ring. Pro wrestling to us is everything.

WF: Watching some of the available documentaries it´s obvious that your family is a special one, but it´s family. You stick together and love each other, no matter what.
How difficult is it for you and your wife as parents to see your kids wrestle all around the globe but so far away? Do you worry much? How do you stay in touch – do you try to communicate daily? I guess it is especially hard with your daughter – your baby being that far away…

RN: It’s very hard but Skype etc make the world a smaller place. So we contact as regular as possible as yeah we are a very close family and we live for each other.

WF: There currently are a lot of British talents, pro wrestling experiences another boom. As a promoter you surely stay informed about the scene. What catches your attention and has a future, in your eyes?

RN: RKJ, PJ Knight, Sonny Smasher, Karama, Battlekat CT, Finlay, Elsie Paige, Leia Elise, all under 18 but watch out for them in future.

WF: Let´s say you were to fight one more match on a grand stage. Were and who would you wish to fight?

RN: All my boys as a family once more in a hardcore cage match.

WF: We thank you for your time. Thank you for all that you and your family have done and will do for the fans out there! Stay safe!