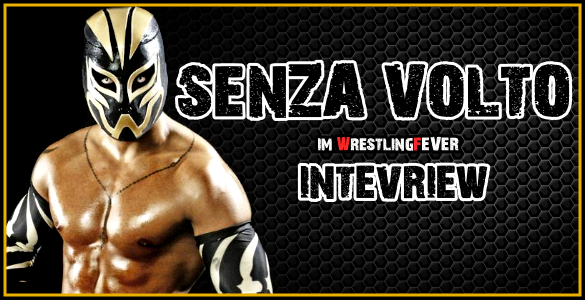 WF: Thank you very much for your commitment. We are delighted to introduce you to the German fans. How are you?

SV: Great! 2017 looks very good for me, we are only in February and for the moment it seems to be an amazing year.

WF: There aren’t many facts or information to be found about you. Your matches only date back to 2015. You were born in France. Who trained you?

SV: Actually I never had a trainer … I was 6 months in a wrestling school in Paris and I just learned how do bump. Then I attended like 2 seminars and I was already booked for some promotions. We can say that I learned by and from myself match after match. I was very lucky and my character helped me to have many bookings.

WF: Did you always want to be a ‘Luchador’?

SV: A L W A Y S ! I mean sometimes I ask myself that, if the Lucha Libre didn’t exist, would my love for wrestling will be the same?
I think my answer would be: „No“.
Because this style is important to me, my moves from this style surprise everybody in a wrestling show. And actually this is what I like to do during my matches … surprise the crowd .

WF: What fascinates you about it and did you always plan on wearing a mask?

SV: Not really. The story around the mask is a simple one. I m such a big fan of superheroes like Superman , Spiderman , Iron Man etc … but my favorite is Batman. The mask, double identity, the darkness of the character. I think I always wanted be one of them when I was a child so I use these things in wrestling and make it a good mix ! I mean , I think ! LOL

WF: How did it come to your name?

SV: You know, I did not want to create an entire character. I wanted to be a symbol, something that anyone could incarnate. Senza Volto means „No Face“ in Italian, I am a faceless warrior. Senza Volto is not a person, it’s a „thing“. Everyone can become Senza Volto, just put on the mask.
I often say that I wear a mask, not to hide WHO I am, but to create WHAT I am.

WF: We already enjoyed watching you at GHW and GWF, how did you like it here and do the French shows compare to German ones?

SV: It’s always a big pleasure to wrestle in Germany. I mean the crowd is always ready to make some noise from the beginning of the show until the end of it! This is why I do that, to hear everybody in the arena singing, clap in her hands and be happy. In France it is more difficult. The wrestling business in France is small and it’s very difficult for us – French wrestlers …

WF: How would you describe the wrestling scene in France?

SV: There are so many talents in France! But it’s too bad because it’s really difficult to make a name in our country. I mean we don’t have TV or Radio to talk about it. Most of the time there are only small shows but I’m sure that one day everything is gonna chance because, let me repeat myself:
There are talents in France, mark my words.

WF: Do you have role models, idols?

SV: Actually I got two models. Before my Wrestling career, when I was a fan and watched wrestling on TV for the time, only one wrestler made me jump off my seat and this man was Rey Mysterio. You can’t imagine how many times I watched his matches, his moves. Now that I am an indy wrestler, it’s really different. Mysterio got a classic high-flying style from Mexico but I fell in love with high-flying from the indy scene and who is *the King of High-Flying* in indy wrestling? Ricochet. His move set, his ring skills are so crazy.
So definitely Ricochet!

WF: Do you, in your young career, already have some personal highlights you would like to share?

SV: I think the biggest one was when I made my first steps in Hungary for HCW. It was the first time that I took flights for Wrestling. I thought nobody in Hungary did know me but the crowd welcomed me like one of them and it was a very important moment for me because I understood that wrestling doesn’t have borders. I felt the same feeling when I made my first steps for GWF in Germany. Wrestling is an amazing world and I feel so lucky to be inside of it.

WF: Was or is there any contact to Mexico yet, I guess you would like to work or train there one day, right?

SV: I had many opportunities to go to Mexico to become better.
Problem is: Time!
Every weekend I got bookings from all over Europe so I’d have to skip out on shows here, for a month or two, to go there. But it’s not a real problem for now, I mean, I’m beginning to make a name for myself in the European scene which is a very important time for me and missing a whole month can be really bad for my business … but I m sure one day I will be in Mexico to wrestle. We’re gonna do that step by step.

WF: Did you already have a tryout with WWE?

SV: No never. I’m really focused on the indy scene and I want be at the top. But if WWE does contact me, why not ? But maybe it’s too soon, I mean, I started wrestling two years ago so being in a WWE tryout would make me look slighty arrogant, no? I don’t know … I am this kind of guy who takes life day by day so maybe some time in the next few years?

WF: Thank you very much for your time and we wish you all the best!