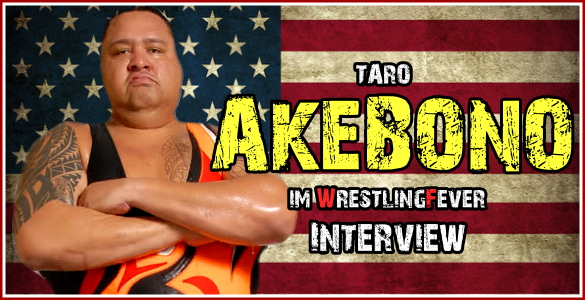 WF: Thanks a lot for your commitment. It is an honor to have this interview with you. How are you?

A: I am fine just been busy
Sorry for the late reply on these questions

WF: We know you as a professional Sumo wrestler, pro-wrestler and the owner of a chain of steakhouse restaurants. Let me start with an unusual question:
What made you open a steakhouse and expand it?

A: I just wanted to open something that I wanted to eat
It just gives me a chance to have a place to go & have contact with the fans

WF: In the legendary ‚Ribera‘ steakhouse you can order an ‚Akebono Steak‘. How did it come to that steak, what´s its backstory?

A: Ribera is actually the first place I ever went to eat when I came to japan in ’88
I remembered the restaurant but didn’t know where it was
It took me 15 yrs to find it again

WF: You are a tall and heavy guy. What do you have to eat to stay in shape and weight? Please tell your fans about how prestigious Sumo wrestlers are in Japan and its tradition ..

A: In Japanese culture back in the older days it was God, Emperor, Sumotori
For me I guess it was just being Polynesian that contributed to my size
Even if u look at Polynesian wrestlers

WF: How did you become a Sumo wrestler and didn´t your brother want to join it as well?

A: it was by being in the right place at the right time
They actually wanted my younger brother
They said he was the perfect size for sumo he was about 6ft 2, 3 inches I was 6ft 7inch

WF: How did they treat you as non-japanese Sumo wrestler? Were they more critical towards you? Maybe even tried to make you leave?

A: I had no problems from being Japanese
The problem is that a lot of foreigners come & try to change the world to fit them that is not going to work even in the pro wrestling world
If you are ready to work hard & learn it is a very accepting culture

WF: What´s the atmosphere like between Sumo wrestler in general? They sure treat each other with respect but do you work together for the host of a tournament or is it more everyone for himself? Is there much jeaslousy between them? It´s a business after all.

A: I only can tell you from my experience
We had mutual respect for each other but we were not friends that would go out & have a beer

WF: What was the heaviest weight you ever had? What was you usual weight in a Sumo fight?

WF: Did you win a wrestling title you are especially attached to? If yes, why is that?

A: the triple crown & Asian tag
The reason being to me is because Japanese pro wrestling came form sumo
Rikidozan being a ex Sumotori

WF: You are still quite busy among other thing in movies. Do you have any other (future) projects running or planned? Would you like to go on as an actor, will you stick with wrestling or try something completely different?

A: I will continue to wrestle as long as I can be smack in the middle competing

WF: German wrestlingfans know you from Wrestlemania 21 against ‚Big Show‘. Do you remember how it came to this match in WWE and what are your personal memories of this event?

A: it was also I was in the right place at the right time again

WF: You have been in Japan for a long time. Please tell us about its culture, what is completely different from the USA? I heard that it´s considered rude or digusting to blow your nose.

A: being from Hawaii the culture is actually closer to japan then the USA so it is easier for us to be here then in the states

WF: I would like a brief inside view of your K1 career. You are quite an athlete. Was MMA something you wanted to do in your life?

A: that is also about being there at the right time I was actually working out with Ray Sefo & his trainers to lose weight after retiring from sumo
They actually came & called me out

WF: How did it come to your name „Akebono Tarō“? Is there a story behind it?

A: because of my height when I stood up they said it looks like the sun raising

WF: If one wants to book you for a show, is it possible and how can they do that and are there any personal words you´d like to give to your German fans?

A: yes it all you have to do is contact me directly or contact all japan
I would like to thank the German fans for the love & support hopefully I will be able to go there 1 day

WF: Thank you again for your time and commitment.