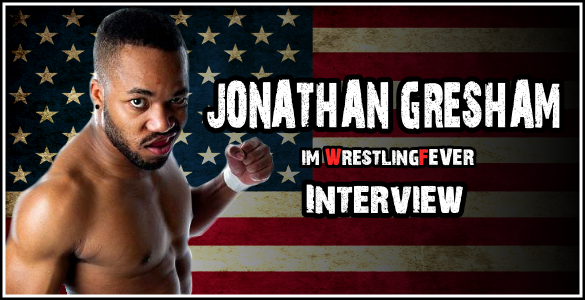 WF: Thank you Jonathan for taking the time for this interview!

JG: no problem, thanks for having me.

WF: You are an activ wrestler for 10 years now. Let us know how it all started. What motivated you to start your wrestlingcareer?

WF: So you wrestled for CHIKARA, RoH but also wXw. How much time do you have between your shows to visit the citys, the sights and getting in contact with the people?

JG: This is a common misconception about travelling wrestlers. I’m only going to speak for myself. But its normally in and out ya know. You gotta drive or fly into town, get some food, get to the arena, stretch, get ready and do the event. By the time its over you maybe have time to see a local bar for some food before having to get sleep or leave for home or the next town. So to answer your question no, not normally. On long tours to Japan or Germany id get a few times to hang out and see sights.

WF: You are mainly booked in America. Is wrestling still the big thing in the USA? And why do you think that especially the americans are fascinated by wrestling?

JG: Yes American is the home of WWE the biggest company in Pro wrestling. So id say yes its still pretty big here. Its another form of entertainment, like any other big event. Baseball, basketball etc… Its a hobby or pass time for most.

WF: Besides of America and Europe you also wrestled quite a time for Zero 1 in Japan and also worked for DTU in Mexico. What are the biggest differences between America, Europe, Japan and Mexico regarding the wrestingscene?

JG: the biggest differance is of course what is expected from you as a wrestler. The fans enjoy different styles from country to country so you have to adjust as a performer to make it work.

WF: You certainly were a wrestling fan when you started your training. Did this changed as you are now part of the shows? Do you still see you as a wresting fan?

JG: I have to at times take a step back and go into „enjoy“ mode. As I normally watch wrestling now mainly to study the art. So yes im still a fan as well. That’s what makes the job so great.

WF: Can you tell us how the idea of the Calamari Catch Kings was born? We would like to hear the story behind the name and the team itself.

JG: It’s really not much of a story to tell. Brookes and I have been friends for quite a while. We train together as well. So we’d study pretty much the same moves and styles. We both adopted the Octopus stretch as our signature move. So we decided to go in the direction of something dealing with squids and such. Pretty much came up with the name in Brookes’s living room with his moms help haha.

WF: Befor your time with Calamari Catch Kings at wXw you were part of the successful team RockSkillet with Jay Skillet. Do you have some special memories about this time and this team? Maybe your titlereign was wXw Tag Team Champions?

JG: I think the one thing i remember most from that time is actually becoming friends with Skillet he was the first guy in germany i actually started to hang out with. Good times.

WF: As you are one of the smaller guy with a more technical style of wrestling was there ever a time that you worked as a masked wrestler and if so how did this started?

JG: I did do a mask early in my career. Again the story is nothing special. I was new to wrestling and thought id try it out. It was fun but not for me. I did a bit in Mexico and PWA in Houston Texas for Booker T’s promotion with the gimmick.

WF: Are there one or two matches in your career that you still like to remeber. If so which matches were they and what made them special for you?

JG: The number one match as of now has to be my match vs Ikuto Hidaka in Japan for Zero 1. I learned so much from him way before i ever met him. So for my life to actually have me wind up in Japan and wrestling him in a big Jr tournament will forever be a top of my fav matches. I still think about it a think how crazy life is you just never know where you’ll end up.

WF: Imagine that you are going to wrestle at WrestleMania. Who would be your dream opponent and why?

JG: Chris Jericho or Bryan Danielson. Cause they display exactly what I love/enjoy about pro wrestling.

WF: CZW is mostly characterized by their more brutal matches. Do you think it is still necessary to attract people with Hardcore- or even Deathmatches?

JG: I think its whatever floats your boat. If people like it, make a market for it.

WF: In 2010 you had your first match in wXw. Since than 5 years have past and you came back to germany every year. So tell us what has changed most for you wrestling wise during this time?

JG: I have just grown as a wrestler thanks to me being apart of the wXw roster ive had the oppertunity to wrestle people id never have the chance to otherwise. Not to mention the countless seminars wXw runs ive pretty much attended everyone of them when im over. They also help a lot.

WF: Thank you for your time and all the best for your future!

JG: thank you again for having me.