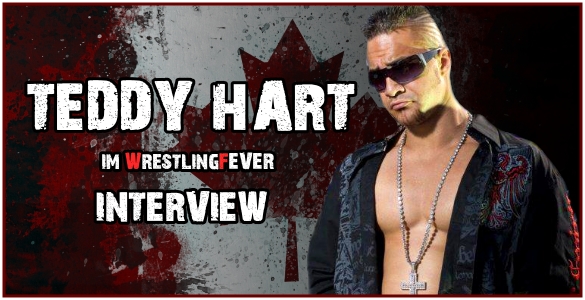 WF: Thank you for your interest in this interview, Teddy!

TH: I’m flattered that Germany is still interested in what Teddy Hart has to say.

WF: In Germany we last saw you with GWP in 2006. How do you remember that show, your legendary Moonsault, fans and management?

TH: I was amazed about how well the German fans remembered Bret Hart. The respect that he earned allowed me a type of royal treatment. This feeling of importance made me climb up that pole and hit the 25 ft moonsault for the fans. Something I believe would be marked down in people’s memories. I don’t have the same platform as Bret that he had in WWE. I had one chance to make the German fans happy so I thought the risk was worth their happiness. I believe the fans have so much love for wrestling, and don’t get to see it much in Germany. Their love and appreciation of this sport my family helped create made me feel invincible.

WF: Your last name is well known by wrestling fans all over the world. Does this put any extra pressure on you? Do promoters expect more from you than from others?

TH: I think it goes without saying I have big boots to fill all of the time. I consider myself the measuring stick, based on the names that came out of the dungeon and Stampede Wrestling. Teddy Hart must deliver a performance that very few wrestlers on the planet can duplicate, rather than riding the coat tails of my father or uncles like most 2nd and 3rd generation wrestlers do. Not learning the proper fundamentals, and not feeling the risk of doing high flying maneuvers based on nepotism, allowing them to get jobs without being properly trained.

WF: When one googles you, first thing that appears in the results is the legendary RoH incident, do you like to take center stage or liked to?

TH: The fact that off that height, risking potential injury or death, made the fans excited. I admit, I lost myself in the heat of the moment and have no recollection of doing those moves. As I say, and have always said, I had suffered a concussion and was unaware of my actions until after watching it. It’s haunted me for years. I understand the company’s side of it and why the boys in the back were upset. All I can do is try to make it up to the fans who were upset and to the boys in the back by having great matches with them. Every wrestler wants to be center stage.

WF: You were in Japan, Mexico and even in Europe. What are your impressions of Japan, AAA, colleagues and fans?

TH: Mexican fans are the most loyal fans I’ve ever seen. Die hard wrestling fans is what I call them, it’s part of their culture. Japan was nice, I’d love to go back there for a serious company. Most of the people I meet in wrestling are very respectful and kind. I value my fans anywhere and everywhere.

WF: What comes to your mind when I mention *TripleMania*?

TH: How much balls AAA had to put me on their show lol.

WF: When you were younger you worked for WWE – can you tell us why it didn´t work out? Has there ever been any further interest in you?

TH: There’s always a potential interest in Teddy Hart. All I can do is keep training and inventing new offense for the evolution of the wrestling business. That, I think, will attract interest. I consider it a uphill battle.

WF: Would you still consider today’s WWE an option for you?

TH: Maybe in a couple of years. I’m working hard to clean up my reputation and get it in the best shape I can. Some of the reputation I deserve, some is smoke in mirrors. In other words, bullshit (for German fans who haven’t heard me speak out on behalf of myself). Being one of the most controversial people in wrestling, a 3rd generation Hart, it carries a lot of pressure. I pride myself on not cracking under pressure and delivering great performances. If I can continue to create great matches, and promoters and Teddy Hart’s name will continue to grow and improve, I hope to get another chance to prove that to the WWE.

WF: Recently a new wrestlingschool opened in Texas. Did you fulfill a dream with it? Will we still be able to see you in action worldwide?

TH: The wrestling school dream is being fulfilled daily. I have a beautiful facility in Dallas. I welcome any wrestler to challenge himself to join the new Texas Hart Dungeon. I still keep a full schedule for wrestling and travel.

WF: Do you keep track of the carreers of you familymembers like Mike Hart, Nattie, Tyson Kidd and others?

TH: I always support anyone in my family, or people I met in the business who have a good attitude and respect the art and entertainment aspects of this great business.

WF: What can you tell us about *A Hart still pounding*?

TH: I thought it was a great video on my life. I’m working on a part two. I thought Cody Metcalf did a great job on it, traveling all of Mexico with me. I hope German fans can watch it, although translating it may be difficult.

WF: You live together with several cats and women – how does that work? Many guys dream about it but how do the girls get along?

TH: Having a lot of cats has always been a dream of mine. As nice as it is, it takes a lot of time, money and work to do. I wouldn’t suggest anyone to take on several cats lol.

WF: You tried out many things in your life and it´s no secret that you consumed the one or other ’stuff‘. How important are honesty and respect for you?

TH: I’m not into drugs, aside from marijuana. It’s God grown. I smoke pot and I’m prescribed testosterone replacement for my low test levels. Honesty and respect is very important to me. I pride myself on being honest and respectful. Sometimes, by telling the truth, people feel disrespected so it’s a fine line to walk on.

WF: What do you think, why did WSX (Wrestling Society X) fail and how do you remember that time?

TH: It was a great time in my life. A lot of my friends in the same place. The potential made it that much better. After watching the finished product, a lot of corners were cut. Having only 30 minutes for matches cut out a lot of psychology. Don’t get me wrong, the moves were incredible. But without the proper commentary, it makes it more difficult to sell it to the fans. MTV’s lack of help in getting us big stars to help cross promote was a hindrance to the product due to not having the rights.

WF: You are a big fan of Neville – are there other wrestlers today who can impress you – maybe even a rookie/trainee of yours?

TH: I love Ricochet (Prince Puma), Sammy Zane (El Generico), Tyson Kidd and Samurai Del Sol (Kalisto). With Rey Mysterious Jr. going back to Mexico, the world of wrestling is starting to grow for the better. The kids are watching the guys I just talked about, and I believe the future of wrestling is safe. They are great ambassadors to the sport.

TH: When I first went to Mexico, Jack Evans was injured so Sabu replaced him. Sabu ended up carrying my bag through customs, telling me that I was the future of wrestling still and that he was happy to see someone that could do more stuff than he even could. That was a huge sign of respect for me that Sabu trusted the wrestling I did and the innovation that he started and I continued to carry on. I pride myself on being one of the most innovative wrestlers ever. To hear Sabu tell me that was one of the highlights of my career.

WF: How does one contact/book you?

TH: I have a Teddy Hart and Texas Hart Dungeon Facebook Like Page. I also have my girlfriend handle a lot of the bookings because she’s more organized and better with social media than I am lol. Her email is the one I use which is shojomachikowrestling@yahoo.com

WF: Thanks a lot for your time and all the best!

TH: Thank you for the opportunity to reach out to the German fans. I hope to wrestle for you all soon. God bless you all and thank you for keeping this business alive.
_________________