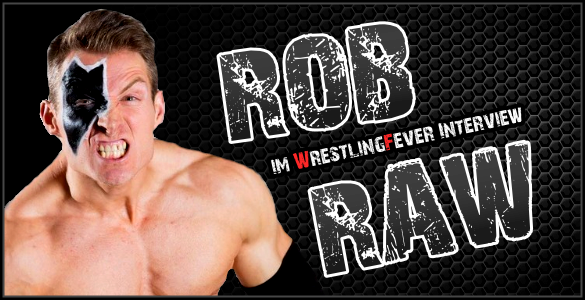 WF: Rob, we are happy to finally be able to conduct this interview with you, how are you currently, what influence is the pandemic having on your life?

Rob: I’m good thanks, but the pandemic had a huge impact on my life. I was running a gym here in Belgium since 2016 and I had to close it due to the pandemic government restrictions. Luckily I found myself a new job very quickly, working as a personal assistant for disabled people and combining that with a nutritional coaching sidejob.

WF: I first noticed you at a DWA show a few years ago. Not only did you convince in the ring, you were also one of the few who impressed visually. You are still in shape today. How important is bodybuilding for you today and to what extent does it determine your daily routine?

Rob: Thanks, I work out about 3 times a week now. Combining weightlift training with corestability and flexibility. My daily routine has indeed become a routine, for years now I’ve been eating about 6 to 7 times a day. Altough I’m less strict as I used to be.

WF: Are there or were there role models or is it just important to you to stay in shape and look good? I can imagine that you often have to go without some things, right?

Rob: I’ve always loved muscular looks, from He-Man over Mr.T to the wrestlers I saw on TV in my early years as a fan. The Ultimate Warrior was one of them. I try to eat healthy but when eating junkfood I try not to exaggerate. But I’m not a freak as far as my food program goes, I also like a few beers now and then.

WF: You have been active as a wrestler for almost 20 years, how did you perceive the development for yourself, what has changed in recent years and can this development be seen everywhere?

Rob: I’ve seen some good and bad developments, students teaching students isn’t one of the good things… I’ve seen too many young guys doing incredible stuff without being able to put on a descent headlock, please don’t skip the basics… The fact that you don’t have to be a ‘6ft4 – 260 pound‘ guy anymore to make it to WWE is a good thing in my opinion. Athletic looking guys can get over, one doesn’t have to be super bulked up like it used to be expected. Healthwise that’s a super step forward.

WF: You were trained by Salvatore Bellomo, among others, how did it all start for you back then – in Belgium?

Rob: In 2003 a friend and me simply went for it. There wasn’t really a wrestling school/club in Belgium so we bought a second hand ring and starting taking lessons (at FCW Holland, FWA UK, etc). Not long after we created the Flemish Wrestling Force (FWF), offering weekly trainings, an insurance and after a while also shows. Trainers in that early period were indeed Salvatore Bellomo, and also Robin ‘The Bull‘ Lekime. Pretty soon we were running regularly and my first steps outside of Belgium were also taken.

WF: How do you remember the beginnings, how were you received back then?

Rob: It was simply awesome to finally be doing this for real, after having been a fan for so many years. I learned a lot in those early years and was grateful for every opportunity that came along. I must say that I was received very well in all the locker rooms and for all the audiences. The old timers were of course more protective of their business and spot, something I understand better now that I myself am starting to become a veteran. But overall the reception was good.

WF: You are known to come from Belgium and are also active as a promoter, how would you describe the Belgian scene, including talents and fans? Can you easily compete with other countries here or does it still take time?

Rob: I used to promote FWF, that is now in the hands of ‘Homeless‘ Tom who’s doing a great job, also as a wrestling academy I can advice FWF for Belgian talents/rookies. But I still promote my yearly CATCHcafé show with Real American Wrestling (RAW). The Belgian scene, like in many countries, has branched. Many split offs have taken place with promoters having their way of booking and promoting. It’s still hard work to get some fans in the seats, but those who do come are mostly enthusiastic. We’re not at the level of the German and English top promotions but some promotions are really going for it. As far as talents go, Mike D Vecchio might be the completest here in Belgium. He might go all the way.

WF: You recently published a book that is finally available in English, please describe briefly what this book is about, does wrestling play a role?

Rob: It’s all about wrestling actually. ‘WRESTLING, an insider’s view‘ gives a view behind the scenes of pro wrestling. It answers a lot of questions surrounding pro wrestling. It also talks about how wrestling originated and further developed into the different styles we know today (Lucha Libre, Puroresu, Catch, American Style, etc). AND it tells my personal story in wrestling, from the early beginnings to my tours of Japan, my WWE experience, USA tour, travels and tales across Europe, etc. It also contains testimonials from wrestlers around the world who I was privileged to work with. So it’s a combination of info and bio, containing about 190 pages with 80 pictures. It can be ordered by e-mailing me; rob_eeckhout@yahoo.com (10,95 for the E-Book, 19,95 + transport for a hard copy)

WF: What do you need (apart from the story) to publish a book, do you produce or are published in smaller quantities. How can you imagine that?

Rob: I found a publisher who was interested in the idea, and who specializes in smaller projects from unknown writers. He helped me to bring it on the market.

WF: Did you implement your book alone, in terms of content and finances, or were there “co-authors”? How can I imagine that. I always thought you would go to a publisher and hope that the story would be accepted so that it would go to press ?!

Rob: The publisher helped to shape the book (lay out) and make it all official. I gave him the stories and chapters, and also the pictures. I financed it too.

WF: As I said, you’ve been with us for a number of years and have even been to Japan, are there any goals you still want to achieve in wrestling or are you satisfied?

Rob: I would love to wrestle in some countries (or parts of the world) I haven’t worked in. Especially Africa or the Middle East. I was close to having a match in CMLL (Mexico) so that would be cool. An actual match in WWE, AEW maybe… but I guess I’m too old for that now. Let’s just hope I can still have a few good (injury free) years. I’m pretty satisfied with what I was able to do in this great business.

WF: For many talents Japan is a big goal for further education, how was it in Japan, how is the training there, the culture and the food – did you get along well with everything?

Rob: Japan was super, I loved the culture and food. Wrestling is still very respected over there and to feel that as a performer is great. It definitely helped me in my career to have been there. The whole story is also in my book. I really fell in love with Japan on my first tour there, very thankful to Mr.Tajiri that he gave me that chance.

WF: You have been active several times in Germany, including at legendary shows, is there a highlight, a match or a story that you keep thinking about and which you would like to share with us?

Rob: Haha, so many great stories… p.s.: read my book 😉
But if I have to pick some out of Germany one would be my match with Marty Janetty for the DWA World Title, where Marty forgot the belt in the US and so we had to improvise… Luckily Johnny Tiger took care of a replica toy belt that for the night would replace the actual belt, a new one was made later on. Another story was a Royal Rumble where I (legit) drew Nr.1 and the script had me planned to go out as last, so that became a long night… 

WF: The facepaint adorns many faces of various talents, why did you choose it – as a tribute for the Ultimate Warrior?

Rob: Yes partly, my first gimmick was The raWior, kind of a rip off. I did just a few matches like that, after that the half face paint became my thing and Rob Raw was born. I always loved face painted gimmicks, from Warrior over Sting, LOD, Demolition and even rock band KISS.

WF: You too were part of a WWE tryout, how did it go back then, can you tell us about it?

Rob: That was a dream come true, working and wrestling in a WWE ring under the guidance of William Regal and Robbie Brookside. But also experiencing the backstage and meeting all those names, guys like Triple H, Big Show and of course Hulk Hogan. The fact that I became a part of the shows (RAW & SmackDown) as a Rosebud, having TV-time, made it complete.

WF: Thank you Rob for your time and all the best!

Rob: Thank you, I salute all my German fans and please if interested in the book e-mail me, rob_eeckhout@yahoo.com