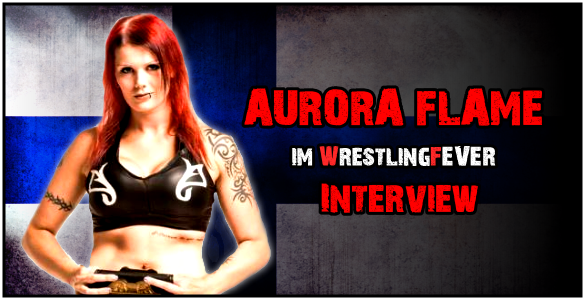 WF: Hey Aurora! First of all thank you for your really fast commitmend for this Interview! We are glad that you are taking your time for us!

AF: The pleasure is all mine.

WF: It’s been a while since you worked your last match. It was a Tournament for the „Bellatrix British Title“. You lost in the First Round against Chanel. Your next opponent in two days will be Lana Austin at „Total Action Wrestling – War Zone“. What are your plans for the future? And how did you kept yourself in shape in the last months?

AF: Just trying to get bookings around the world and wrestle in as many countries as possible. Lately I’ve been dieting and doing a lot of cardio, often assisted by my „personal coach“ Eddie the dog.

AF: I received my training both in England and Finland. In Finland I was trained by Stark Adder and in England by the Knights. I used to come to England on weekends to train, so the training sessions were pretty long since it was 8 hours per day and two days in a row, but it was definitely worth it. „Paige“ was really talented and intensive, even at a young age. I guess she inherited those from her mother „Sweet Saraya“ who is in my opinion one of the best female wrestlers of all time.

WF: You are a 2 time „Nordic Women’s Wrestling Champion“. The first time you held the title for 189 days, the second time for 372 days. There are just a few women at „Fight Club Finland“, but the quality of those is very high. What is the prestige for this Title in Finland? And why did you decided to leave „Fight Club Finland“ a few months ago?

AF: I was also the first ever Nordic Women’s Champion, don’t forget that 😉 The title represents all Nordic Countries, not just Finland, so the championship is very prestigious indeed. I „left“ Fight Club Finland ‚cos I was going to move to England, but due some issues I had to postpone the move to the unknown future.

WF: What are you doing just before performances? Are you still nervous? Do you have certain rituals?

AF: Just some streching and warming up. I don’t usually get nervous, not anymore.

WF: How did your performer name arise? Your Debut Name was „Aurora Liekki“. Tell us something about it.

AF: „Liekki“ means „flame“ in English. I wanted something Nordic, but also something that reflects me. I have a fiery temper, so the northern lights „Aurora Borealis“ fitted there perfectly.

WF: You performed a bunch of Tag-Team Matches in your Career. Do you prefer to work as a „singles“ Wrestler or as a part of a Tag-Team? What is your favourite type of a Wrestling Match?

AF: I just love to wrestle. It doesn’t matter if it’s a single, tag, threeway or whatever-match. Same goes to the match type. There’re all great.

WF: What sports – except wrestling – do you do? What are your hobbies? Your theme Songs („Apocalyptica – Path Vol.2“ and „Foo Fighters – White Limo“) suggest that you are a fan of Rock and Heavy Metal. Is that right?

AF: I have tried a lot of different sports in the past, but only when I found wrestling I was really hooked.
I have a very wide selection of music that I like. My favourites are rock and grunge.

WF: You were born in Nokia, Finland. Can you tell us something about your Homeland? How famous is Wrestling in Finland?

AF: I have travelled a lot of countries, but honestly I have to say Finland is one of the best. I really love my homeland. Sure there are some things that could be better, but no land is perfect. We have all the four seasons of weather and a really beautiful nature and scenery.
Wrestling is still quite small in Finland. Starbuck was the man who brought wrestling here in 2003 if I remember the year right. Back then it was really different than nowadays. Wrestling in Finland has developed to more professional look from those days.

WF: What would you prefer: to be a WWE Diva or a TNA Knockout and why? Has there possibly been any contact between you and WWE or TNA for a Tryout?

AF: I don’t see myself as a „Diva“, I am a wrestler, so for that reason I think I might have to gravitate towards TNA. I don’t know, that’s a tough question, I don’t want to pick and choose.
About a year ago WWE’s talent scout Robbie Brookeside was in Finland to see some of the best wrestlers in the Nordic Countries, and he did give me really positive feedback after my match, but no, I haven’t been contacted from TNA or WWE since then.

WF: Who was your favourite opponent and why? Is there anybody you want to fight necessarily?

AF: I loved to wrestle with Jenny Sjödin (from Sweden). We had many matches against each other and she always brought the best she had, and the matches were very intensive. Love her style.
I would want to wrestle against Lita and Trish. They are the women that inspired me in the beginning of my career.

WF: What do you think about the general view and the development of Womens Wrestling?

AF: I still think that many of the women wrestling today can’t or don’t know how to wrestle. Many of them are there just for their looks or because their boyfriend is a wrestler. And it’s a shame, ‚cause that really depraves the whole scene of women’s wrestling. Of course there are many good and excellent female wrestlers as well, Saraya Knight, Jenny Sjödin, Paige, AJ Lee, Lady Lory, just to name few.

AF: When I go in to the ring it is fully me, squared 10. Sometimes I am in a good mood and there are times I’m having a bad day. There is no „heel“ or „face“, just me.

WF: How do you feel about the social networks? Are you using them to keep in touch with your fans or do you prefer the personal contact at Events?

AF: I don’t mind fans contacting me on shows or on the social media, as long as they’re not creeps or stalkers. I’m so fed up with perverts sending me messages asking if I’d wanna take a headscissors on them etc.

WF: What is the best way to send you a booking request?

WF: Would you like to say a few words to your fans?

AF: Keep following me on Facebook or Twitter! And come to see me wrestle if you have a chance.