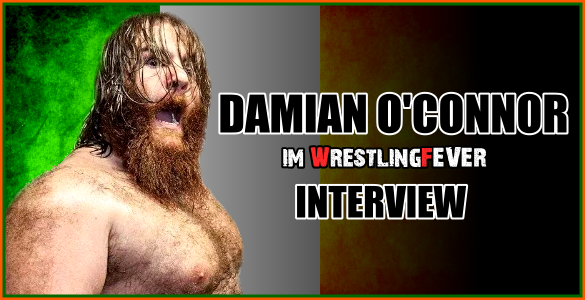 WF: Thank you for your commitment to do this Interview Damian, we are very happy to introduce you to the German Fans.

DC: Thank you for having me. I have enjoyed wrestling in Germany.

WF: You were recently again at the wXw. You enter the ring for many years now. Who or what motivated you to be a wrestler?

DC: I was a fan as a child. When I was 14 or 15 I made a decision to be a wrestler. I think I researched it from the moment we got the Internet in my house. I spent the next few years trying to find the right school. I was born in Belfast and when I was 14 we moved to a tiny fishing village near in North Antrim, Ireland. There were no wrestling schools in my country in the early 2000s so I realised I would have to leave if I wanted to wrestle. I eventually went to weekend training camps in England, before settling in Scotland. There was a small scene there and I could further my wrestling training and support myself.

WF: You have trained with Robbie Brookside, Doug Williams, Prince Fergal Devitt, Johnny Moss and many others. Of course all of these guys are not unknown. How do you remember the training and who lay the foundation for your carreer?

DC: I have trained with so many excellent wrestlers and coaches over the last 11 years. I believe you never stop learning in wrestling and I still attend seminars with veterans today or ask their advice if they see my matches. In my early training I found aspects easy and other aspects difficult. I loved the physicality. Sometimes guys liked to be rough with the new guys, but I had a backround in rugby, judo and other sports. So i gave as good as I got haha! Training with Prince Devitt and Johnny Moss made me take wrestling more seriously – in the ring and training my own body in the gym. The realism, the aggression, they helped me understand it’s importance. Paul Tracey helped me with my character work. He made me understand selling better than anyone before. Robbie Brookside helped me put everything together. Mostly the match psychology – the reason why we do everything. His critique of my promos and matches made me change my beliefs and I adapted and evolved my character.

WF: You are from Belfast – so i have to ask you about Finlay. Did you ever met or wrestled him?

DC: Finlay is one of my heroes. I met him at a WWE tryout in London in 2010. I never got the opportunity to wrestle him but hopefully one day I will.

WF: You developed yourself from a technician to a brawler – Is that correct and why?

DC: Yeah, I was and still am, a huge advocate for technical or „Scientific“ wrestling. When i was smaller I would enjoy working in and out of holds. We come from a great tradition in British and Irish wrestling and we shouldn’t forget it. We have legends available to us and I’ve been very lucky to train under them. In the past few years I trained under Kung Fu Eddie Hamill, Johnny Saint, Marty Jones, Johnny Kidd, Drew Mcdonald (RIP) and more. It is so important to have this backround in technical wrestling, because you may one day need it. Better to have the ability and not use it than to need the ability and not have it. As I got bigger I limited the amount of technical work and focused more on my strikes. I still use holds in my matches, but ill be less likely to go hold for hold like i did 5 years ago! Unless I’m wrestling another agile big man.

WF: Sometimes you perform as „Big Damo“ and sometimes as „Damian O´Connor“ – is there a difference between this Gimmicks?

DC: Not really. They are different names, not gimmicks. Some promoters prefer to call me Damo, others Damian O’Connor. I don’t really care. I will still be the „Beast of Belfast“

WF: Do you remember why you chose the Name „O´Connor“`?

DC: In the Irish language O’Connor means „Son of Conor“ My father is Conor, so I use this name in his honour.

WF: Are there any idols in Pro Wrestling for you?

DC: As i said before, Finlay is one of my heroes in and out of the ring. He made the transition between Britain, to Germany, to America, took time away, then returned in the middle of a new era and each time he was amazing. He never really changed who he was, his style just transitioned perfectly and he is possibly the biggest inspiration I’ve had. He could wrestle tomorrow and it would be excellent. Other than him „Judo“ Pete Roberts is a huge influence. He was so ahead of his time. More recently I have enjoyed the work of Vader, Ishii, Stan Hanson and Bam Bam Bigelow.

WF: You got a huge fighting weight, are you prepared to pay attention to diet or can you keep your weight easily? If anybody watches your optical career one might think (without being disrespectful) that you well gained weight…

DC: Keeping the weight is difficult. I must eat maybe 5000 calories per day. I always lift weights and I do a lot of cardio. It may surprise people but I do a lot of in ring drills every week between shows. I aim to be the best „big man“ in the world.

WF: Actually you are wearing a long Hair and a long Beard. How important is change for you, optical and in the Ring?

DC: The beard and the hair are maybe not the best for optimal performance, some wrestlers pull at it, but it intimidates people and I like how it looks. There are few people in the world who want to look this way. I don’t care much for clothing style or trends. I wear what I want and look how I want.

WF: How would you describe the Character „Damian O`Connor“?

DC: O’Connor is a „what you see is what you get“ character. He’s 6’4 and 23 stone. He is a barbarian. A throwback to the warriors of old. He will try to tear you apart, using strikes or by vicious submissions. He will even stand on you to try and wear you down. If that doesn’t work he will climb to the top rope and jump 16-20 feet to kick you in the face. If he is a baby face, he will be the exact same, but he might smile… sometimes.

WF: In the meantime you train the offspring, known Names are Nikki Storm or Viper, who we know from the Bootcamp. How did u pursue the TNA Bootcamp?

DC: TNA got in touch with me to use my facility in Glasgow for the Glasgow leg of the Bootcamp TV show. The likes of Nikki Storm and Viper are phenomenally talented wrestlers. They have both been training with me for almost 7 years. Nikki is currently touring in America and has just been announced as debuting for Stardom in Japan. Viper is creating waves in Europe with her unique style and it’s only a matter of time before she travels outside herself.

WF: Would the Bootcamp or TNA generally be interesting for you? Generally Mainstream and America?

DC: I would be interested in talking to any company, mainstream or not, who could provide me with a better living wage than I am on now.

WF: Thank you for your time, we wish you all the best!