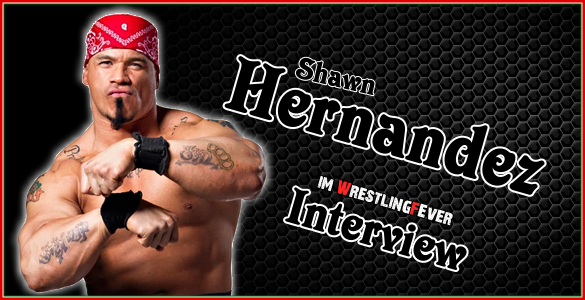 WF: Thank you Shawn, we hope you are well.

SH: Awesome thank you for having me.

WF: When we think of Hernandez, we think of a big and agile wrestler as well as ‚LAX‘. What are your memories of this stable, the pairing and the idea behind it?

SH: For Latinos, it was the biggest thing it was biggest thing for not only us but for all Latino American fans. The dynamic was perfect at the time. A Latin legend in Konnan on the mic. Homicide the crazy cruiserweight that can do it all. And myself as the muscle who was always willing to give a big move or take one.

WF: What is the meaning and thought behind the melody you whistle before you jump an opponent outside the ring?

SH: Hahaha! That whistle has a very special meaning in Mexico. It literally means „Chinga su Madre“ in Spanish. I’ll let the fans reading this google translate that!

WF: Recently you returned to Impact Wrestling and as we all know the Corona pandemic still a factor everywhere. What is it like as an active wrestler, I imgaine it to be terrible to perform without an audience… What other restrictions are there for you and your colleagues?

SH: Impact is a very health conscious company. Upon arrival to Nashville you are given a covid test. You are not allowed anywhere without a negative result and wristband to show everyone you are working that you have a negative result.

WF: You were spotted in a gym and later could fulfill you dream – to become a wrestler. Your family was against it back then, what are their thoughts today and did you follow your parents wishes and got an education?

SH: My parents were against wrestling before education. I went to college on an American football scholarship for 4 and then played Arena Football in Houston before I trained in wrestling.

WF: Your debut match was in the early 2000s at TNA, did you feel ready for such a big task and international TV?

SH: We all think we are ready for the big stage until you get there! It was very overwhelming but the veterans there helped out tremendously.

WF: You had been to Japan, Mexico and the US of course. What´s it like to suddenly perform in front of cameras, what is different for you as a performer compared to matches WITHOUT cameras? What rules apply when cameras are on you?

SH: Time, time, time! With Television wrestling you are literally counting seconds on your match. Too much time over? The much is either edited or the next match loses there time for their match if it is live television.

WF: You have been to Germany a few times, how do you remember your visits here? Do you have a funny story/roadstory or memory you could share with us?

SH: The german fans are crazy! I love them. I am not used to the European style of using rounds in pro wrestling. The songs and chants the fans give you are ridiculously awesome! Plus the Germany fans love there alcohol. I remember one time an old lady gave me a small bottle of liquor between rounds one bight. And the crowd chanted at me until I drank it all before the next round began!

WF: How did Konnan influence your career, do you have idols?

SH:Konnan is a well respected Latin legend but my tv mentor was my partner Homicide Dee Erazo.

WF: What are your thoughts on the change from ‚TNA Wrestling‘ to todays ‚IMPACT Wrestling‘ product? What was it like back then to have Hulk Hogan, Sting and Booker T. Working there?

SH: Impact is a great product. It just needs more eyes on the product. Which means either promoting the show to where people are tuning in more to the show or go to a network where impact can get more exposure.

WF: How did you guys feel when ‚LAX‘ was disbanded, did you have any word in it and how do you see it now?

SH: LAX in my opinion had more things to accomplish before it was disbanded. Ultimately it was management at the time that thought LAX had tan its course.

WF: Speaking of IMPACT Wrestling. One half of their Tag Team Champions ‚Doc Gallows‘ recently promoted his own show of ‚Lariato Pro Wrestling‘ which had quite the surprise for wrestling fans.
CaZXL to fans better known as ‚Big Cass‘ made his return to the ring and together with you saved nZo (a.k.a. Enzo Amore). Since there was no previous shoutout or even hint of this to happen, what was he like and what was it like for you? Did you know in advance that he will be there?

SH: Yes of course Gallows told me who the surprise was. We have been friends for almost 10 years. Big Cass is a humble superstar who came back to wrestling in amazing shape. The sky is still the limit for him as he is still young!

WF: AJ Styles has been the face of TNA for some time but now works for the company from Stamford. Was there any contact to WWE and ‚Hernandez‘? I heard you were there in 2000 and 2001, what happened after?

SH: I did WWF tryout matches when they came to Texas. I appreciated the opportunity but never interested in being with the company full time. I enjoyed traveling to different countries and wrestling the best in the world not just one company.

WF: Let me ask a quick question about ‚Lucha Underground‘. We were able to watch the ‚completely different‘ product on Germany TV and many (including me) couldn´t cotton up to it. What do you think about this format, aside from it being work for you.

SH: Lucha Underground was lucha Libre mixed with MTV and “B” action movies all rolled into one. It was the most innovative show in the last 10 years. It is sad it was able to sustain life after only 4 years.

WF: Do you think such a product can be a trendsetter?

SH: Lucha Underground was a trendsetter. Look at how many wrestlers from there have gone on to be bigger stars in WWE AEW and Impact?

WF: Do you still have plans/dreams to pursue, an opponent you still want to feud against?

SH: I have had the privilege to wrestle the best wrestlers in the world. I would love to reunite my feuds with the best in Germany India and Japan.

WF: I heard you tried ‚Yoga‘, do you still do it and did you reach personal goals?

SH: Yoga is hard! I have a lot of respect for any person who practices yoga! I am still in intermediate level! Hahaha One day I will graduate I hope!

WF: What are your plans after your wrestling career? You are now over 40 years old, have a familiy at home and I am quite sure the one or other bone calls out regularly (despite Yoga)…

SH: I plan on teaching aspiring wrestlers and audition for tv and movie roles. After over 20 years of wrestling with two surgeries (neck) and (ankle) I need all the yoga and spa I can receive!

WF: Thank you so much for your time! Stay safe and well!

SH: Thank you so much for the interview!