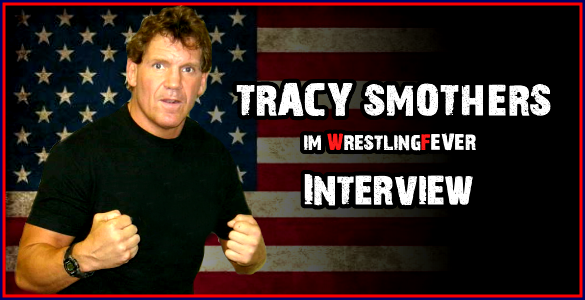 WF: Thank you for the spontaneous commitment Tracy, it’s an honor to have won you for an interview!

TS: Thanks for having me.

WF: Many wrestlers use a “stage name”, in your career you usually competed under your real name. Have you deliberately chose it or do you think it just sounds great?

TS: I never gave it that much thought really.

WF: Most fans know you from the ECW where you were part of the „FBI“. Do you remember who give you the role of the „Italian“ and can you explain the success of this group? For the fans it was really great…

TS: Tommy Dreamer put Tommy Rich,myself with Guido an it was a lot of fun.People took to it cause it was different.

WF: „Little Guido“ has certainly got a great opportunity with the FBI, wrestlers would hardly become wrestlers with his size and stature years ago. How do you see the general trend towards ever faster, „leaner“ wrestlers these days?

TS: Everything changes in anything u do.People seem to wanna see lots of actions nowdays.I jus try to go with the flow an adjust.

WF: When and why did you make the decision to become a pro wrestler?

TS: Grew up wathcing wrestling an always respected the athleticsm it took to do it.Knew they were tough guys to.

WF: The ECW is still a cult promotion for many fans – how do you explain this long-term success?

TS: It was different,very violent,had a cutting edge to it.

WF: You were also part of WCW & WWE of course, the other two large Promotions in the USA. Your time at „Smoky Mountain Wrestling, where many later stars had their beginnings (Storm, Jericho, etc.) is also unforgettable. You are active for many years, have worked for all, what has essentially changed in the biz?

TS: The biz is like everything its constantly evolving,the bar gets raised all the time.

WF: You have been trained by Steven Keirn, the original Doink who unfortunately passed away. What memories do you have from THE Doink?

TS: Matt Borne, RIP was the original Doink. Steve Kiern, Stan Lane, trained me an I learned tons from them, love those guys. Steve IS A TRAINER, PROMOTER TODAY FOR WWE DEVELOPMENTAL IN orlando fl.

WF: If you are as long here as you, you’re training the newcomers too, of course. Daniel Bryan was allegedly among other wrestlers, trained by you. Did you ever think he could make it to the top one day?

TS: Ya,Daniel was traine by Shawn Michaels.Steve Regal,Robbie Brookside really took him under their wing an helped him lots too.He is,was,a student of our biz.

WF: You are a term for many fans, would the WWE Hall of Fame be an option for you? Misc. Legends have already rejected, as the Honky Tonk Man for example.

TS: If they offered to someday put me in it sure I would. It would be a honor.

WF: Are there one or two favorite matches, personal highlights of the career you want to tell us?

TS: My favorite single matches were with Chris Candido, tag matches with the Midnight Express, Freebirds.

WF: A lot of fans like you as a heel, a villain who quickly can muster the fans against him. Do you like this role personally more or would you prefer to act as a face?

TS: Whatever the promoter wants,needs,for a show is fine with me.I try to be a pro.Love being a heel though,lol.

WF: Do you see the Internet rather than a curse or a blessing (and why)? There was a time where they talk about something like kayfabe etc. – sadly, this is no more?

TS: Like I said any biz, sport, always changes, evolves.

WF: Many wrestlers often fought with personal problems, some have lost their lives therefore – you’re always getting a rough ride?

TS: Ya,is sad that so many are gone. Our biz is a brutal, unforgiving rough biz for sure.

WF: If I always ask the wrestler what is so great about this profession, many answer me that they can travel to many countries, what disadvantages do you see?

TS: Used to be lots more full time jobs in the biz,now not near as much,ugh.

WF: You’re also an active promoter, how came this the decision?

TS: No IM NOT,RAN A FEW SHOWS,BOOKED some but thats a headache I don,t want.Jus wanna wk an have fun.

TS: Ur welcome an sorry it took me so long to do this interview.