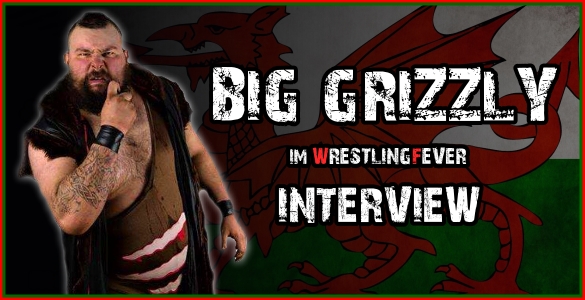 WF: Thank you for your consent to have this interview *Big Grizzly*!

BG: my plesure Markus thanks!

BG: Well i‘ve always had some sort of facial hair ever since i can remember even through my rugby playing days but when i got into wrestling training in early 2012 i realised i needed to stand out even more than i already did. Beards werent as cool then as they seem to be now either, but i decided to grow it out. Then one day a mate of mine just called me Grizz out of nowhere really and it just stuck. I wish my story was exciting but thats the truth haha!

WF: Wrestling in the UK has a long tradition. How was your training?

BG: My Training was good. Started in early 2012 at DragonPro wrestling academy in Newport south Wales under head trainer Mike Bird. Also at the Academy helping out with Training was Mark Andrews and Wild Boar Mike Hitchman. As you can imagine i learned a ton about wrestling in a short space of time, but for me it wasnt until mid 2013 when i started working regurly with Alan Ravenhill’s Welsh Wrestling that i really grasped it and started putting it all together. When i say my first run of matches with them were mostly with British legend James Mason. I cant even explain the amount i learned from being in the ring with James and the locker room full of talented underrated guys.

WF: Though you aren´t active as long as many others you show a nice record of victories throughout the past months. What can the fans expect when *Big Grizzly* is announced?

BG: You can expect some big power moves and a great beard… but also noise. I want to know that crowd loves me or hates me so ill be trying my hardest to get the best reactions.

WF: What made you decide to become a pro-wrestler?

BG: Id always wanted to be a Wrestler growing up like most kids but i didnt realise that there was so much going on in the u.k until the wrestling channel came around. It was still a few years till i found DragonPro and since then ive never looked back. like most other wrestlers i grew up watching it, I cant remember not being a fan. Wcw wordwide was the first wrestling i started watching. It was on itv in the uk in the early 90’s so the first wrestlers i remember were guys like Sting, vader and cactus Jack. Then my family started buying me the wwf stuff on tape thats when i first saw the likes of Hulk Hogan, Ultimate Warrior and The Macho Man. My top five of all time though has to be… Undertaker kane sting ric flair and Bret Hart

WF: When you share the backstage area with celebrities, do you stay calm or is it still a big deal to you? Have you had a special moment?

BG: Its always sureal when you bump into someone you‘ve watched on T.v, but we are all on the same show to do the same job and thats entertain the crowd.

WF: Do you watch your own matches again or ask veterans for their feedback and critics?

BG: if theres footage availble i will watch it back for sure. As for feedback on matches, of course… every time. If theres someone who watches my match ill be asking. I want to keep improving and learning week in week out.

WF: Among others you have already wrestled against *Bad Bones* who currently is THE wrestler in Germany. How do you remember that match and the person Bones?

BG: I really enjoyed the Match with Bad Bones and he was a top guy. Hopefully he enjoyed it too…

WF: Are there countries you are longing to travel to to wrestle?

BG: The top three places id like to travel would be Usa, japan and Germany, thats not ruling out bookings elsewhere either! I do think though, British Wrestling is on a massive high and i want to keep improving and add to that.

WF: They recently aired the second season of *TNA – ‚British Bootcamp’*. What do you guys think of it. Or maybe you were part of it?

BG: haha no i wasnt a part of it but I think bootcamp is a good way of getting british wrestling on mainsteam Tv. The more exposure for our wrestlers the better.

WF: Since April 2013 you are CW Tag Team Champion – Does this promotion still exist? 😉

BG: unforunately its defunct at the moment but never say never!

BG: in the short time in wrestling ive had the chance of wrestling some top guys, from the usa and the Uk, but as for highlights i’ll get back to you on that one when ive been around for a little longer.

WF: Let´s say you are in the mainevent of WrestleMania. Who would you choose as your oponent and why that person?

BG: This is a tough question. At the moment maybe cesaro or Bray Wyatt. Cesaro because hes just on fire at the moment and Wyatt for that Beard vs Beard match.

WF: We all love road stories. Do you have one for us?

BG: i dont have anything that springs to mind. Im usually the driver so im the one concentrating while the other mess around.

WF: Thank you very much for your time.
If one wants to book you, how can they contact you?