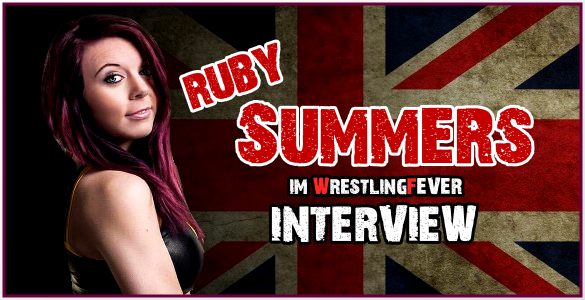 WF: Hello Ruby, hank you for taking some time to answer our questions. How are you?

WF: Did you choose your ring name because of the same-named Marvel character and are there any similarities between you two? Or is there another storie behind choosing your ring name?

RS: I didn’t choose my name from the Marvel character, a lot of people ask that too! I actually chose it because my birthstone is Ruby, and with my birthday being in July it’s right in the middle of Summer, my favourite season

WF: When and how was your first time you came into contact with wrestling?

RS: I used to watch wrestling when I was a little girl and I loved it, I’d also play the PlayStation 1 WWF video games.

WF: How did your family and friends react after you told them that you want to be a professional wrestler? Did they support you from the very beginning or were some of them sceptical?

RS: For the most part to begin with, I was supported by my friends and family, my mum still doesn’t really like it, she supports me, and will come to shows to see me occasionally but it’s just the mothers instinct of not wanting her child to get hurt, my dad is more or less the same, only he doesn’t ask me if I’d rather take up something like flower arranging instead, like my mum does haha.

WF: How was your first training session? Who was the head coach and how was it?

RS: My first training session was March of 2013, my trainer was Paul Clarke at Grapple Wrestling in Leeds. I remember enjoying it so much, I couldn’t wait to come back, everyone was so welcoming and friendly!

WF: Who has been your favourite opponent so far and who is your dream opponent for the future?

RS: I can’t choose just one! So far I’d say, Toni Storm, Nixon, Kay Lee Ray and Sammii Jayne. I have wrestled Viper for literally about a minute during a gauntlet match, viper is someone who id love to have a proper match with! My dream opponent, hmmm, there’s definitely more than one, but to name a few Candice LeRae, Jade, Kimber Lee. Also, Bayley and Sasha Banks!

WF: What are your wrestling goals?

RS: My goals in wrestling- To be regarded as one of the best professional wrestlers in the country.

WF: Do you have any wrestling rolemodels that maybe even influence your own wrestling style?

RS: I’d say my biggest role model, who also happens to be my trainer and my partner, is El Ligero, he’s hard working and dedicated to wrestling and training people. He does influence my style a lot, I always ask him if He thinks stuff would work or what wouldn’t work, or how to tweak some things.

WF: Can you tell us an exciting or funny roadtrip story?

RS: Honestly I don’t really have that many! Once my car broke whilst driving to meet for a show, literally broke, fell apart whilst I was driving down the motorway, bits of my engine and gearbox scattered all over the road, oncoming vehicles tooting their horns at me to get out of the way, I was terrified! Luckily I was rescued by El Ligero who I was supposed to be meeting to drive to a show in Wycombe.

WF: Many people think that England is the best european country when it comes to ladies wrestling. What do you think about that?

RS: There’s so much talent in women’s wrestling all over the world, England does have lots a female talent, but so do lots of other countries too.

WF: What do you think about the progress of european ladies wrestling within the last 5 years?

RS: Myself personally, I enjoy intergender matches. I enjoy watching them, and I enjoy taking part in them. I enjoy showing people that I can hang with the guys too.

WF: Do you watch any wrestling promotion via TV or the internet?

RS: I watch a lot of wrestling and different promotions!

WF: Would you rather be working for NXT, the WWE Main Roaster or TNA?

RS: I’d definitely say NXT, there’s just something about it that’s always so new and fresh.

WF: Do you sell Ruby Summers merchandise or is something like that in the works?

RS: I do still have some tshirts available, yes.

WF: Do you use the social networks to communicate with your fans?

RS: A promoter can book me by sending me a message on Facebook or Twitter, or to RubySummers01@hotmail.co.uk

WF: To round this interview off, a word or two to your fans..

RS: Thank you for your continued support!

WF: Thanks a lot for answering our questions Ruby.

RS: Thanks a lot!