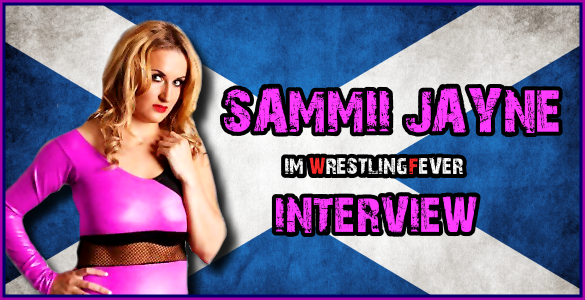 WF: Thank you for your interest in this Interview!

SJ: Thanks for having me.

WF: You certainly once have been a fan of Pro Wrestling and decided to become a wrestler too – Who or what motivated you to do this?

SJ: I watched wrestling as a kid and was always into it. When I got older I found out about a wrestling school nearby and realised this was something that I could maybe actually do. So I went along, tried it out and I’ve never looked back. I always looked up to Lita as a role model in the ring, and I was a big fan of the likes of Chris Benoit and William Regal, and I think a lot of that comes out in my work in the ring.

WF: You’re from Scotland, how popular is Wrestling in your country and how big is the prominence as a Wrestler there?

SJ: Wrestling in Scotland I’d say is in the start of a boom period, lots of good companies putting on great shows, drawing large crowds. I would definitely say it’s a great time for wrestling here and I feel privileged to be a part of that.

WF: How difficult is it for a woman to do a foothold in this Company? Are you respected by the male wrestlers? Especially because of your age?

SJ: I’d say it’s a little harder for the women but on a whole everyone is generally treated as equals. I think the guys see how much effort and hard work we put in, just like they do that it’s more about how good we are in general as apposed to as a female.

WF: You mainly act in the UK, did you ever got the chance to compete in other Countrys?

SJ: I’ve had the chance to wrestle in England and enjoyed that experience, would definitely like to branch out into England more often and other countries if the opportunity arose.

WF: Where would you like to wrestle nescessarily and why?

SJ: I’d love to wrestle in Japan, as much as I love the wrestling the culture there is something I’m very interested in. So it would be great to get the chance to wrestle there as well as experience the culture and life there in general.

WF: Do you acutally watch the Mainstream Wrestling Companys or doesn`t it really matter in your private Life?

SJ: I do watch WWE and NXT, I am a big fan of NJPW so I try to keep up to date with them when I have time.

WF: You are competing since 3 years now, are their any personal Highlights of your career?

SJ: Highlights for me would be some of the matches I’ve worked infront of large crowds. I always enjoy working with Viper and I think we both bring the best out of each other, so I’d have to say either the match we had at SWA Battlezone or the one we had at ICW earlier in the year I’m quite happy with both of those, so those would be highlights also. I also enjoy anytime I get to wrestle Debbie Sharpe or Nikki Storm, I think they are both extremely talented and enjoy every opportunity I get to work with them.

WF: Thank you for your time!