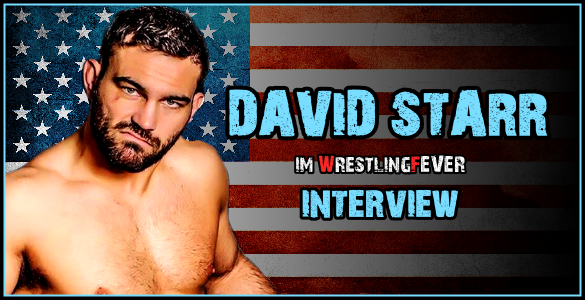 WF: Thank you for doing this interview, David! How are you?

DS: I’m wonderful. Thank you for having me.

WF: You knew very early that you wanted to become a pro wrestler. You were about 5 years old and your parents didn´t like the thought. Why pro wrestling and what do your parents say today?

DS: it’s not that my parents didn’t like the idea, but they wanted me to focus on education and get a „real job.“ They wanted me to be normal I guess. Now that I’m financially independent because of pro wrestling, they seem more ok with it, but I’m sure my mother would rather I do something safer, haha.

WF: It is known that you, among others, trained with Samu at the *Wild Samoan Training Center*. Had you been there for long or *just* attended a few seminars? Later you trained with Masada and others at the CZW Academy…

DS: I was at the WSTC for nearly a year before I focused on being at the CZW Academy.

WF: Some time ago you were in Germany at wXw and it was recently announced that you will be back. You will be part of the GWP show in October and shortly before in Switzerland. How do you recall Europe/Germany?

DS: I LOVED EUROPE! Excited would be an understatement for my return.

WF: Many gimmick matches in wrestling history are stuck in the fans minds, one of them was yours. It was supposed to be a *60 Minutes Iron Man Match* but things changed – please tell us about that match?

DS: No one was really a „guideline“ considering Dave Crist & I have wrestled so many times that mostly we just do everything organically. The match ended up going 104 minutes (an hour 44 minutes) and Dave won. The match was great because the fans at Rockstar Pro are the amazing.

WF: As we hear you have a number of characters. How would you introduce *David Starr* to the fans?

DS: The Cream in Your Coffee, Your Favorite Wrestler’s Favorite Wrestler, The Jewish Cannon, The Physical Embodiment of Charisma, Mr Americanrana, Davey Wrestling, The 104 Minute Man, The King of Taunts, The Product David Starr

WF: Do you really love cats?

WF: Did or do you have personal idols or icons in sports entertainment?

DS: personal idols would be my step father, Bill. I look up to many wrestlers today. They are mentors to me guys like Sami Callihan, Masada, Tommy End, Jake & Dave Crist, Adam Cole, Billy Gunn, and plenty more. Most of all is Tommy Suede.

WF: What are your plans for the future, is NXT a goal or do you prefer indy wrestling?

DS: just taking it day by day always trying to get better. We’ll see where it all takes me. I’m very happy now.

WF: You now also performed in Europe and will return soon, are there dream countries for you, certain places you always wanted to be ?

DS: I wanna go everywhere. I’d be lying if I didn’t say Japan.

WF: Many dream of being a pro wrestler, only a few see the shady sides that this business entails. You´ve been active for some time now, what (in your eyes) changed since you became a pro wrestler? What is completely different from what you expected?

DS: every business has its downsides. It’s not all unicorns and rainbows or whatever, but it’s still something I love. It brings me, as well as most of my peers, happiness. I felt the wrestling industry has matured me and made me a better person.

WF: You once named Nakamura as a dream opponent, did you have the chance to work with him yet and do you still want it? Do you have others you wish to work with?

DS: I never have wrestled him, and I would love to. There’s plenty of others and hopefully they happen soon.

WF: The Germany Wrestling Promotion already announced you and the fans are very excited to see you. How would you describe your style?

DS: I’m the Apollo Creed of pro wrestling. I bring a realism to the sport with my background as well as my attitude. I talk the talk and walk the walk.

WF: You were part of the CZW – How do you stand by hardcore / ultraviolent wrestling?

DS: there are many of my brothers who are deathmatch wrestlers and I have all the respect in the world for them.

WF: Many see RoH as a great wrestling promotion, what do you think, why can´t they step out of the shadows of WWE? Their wrestling is A one – is it missing entertainment? For many indy fans RoH is the BEST WRESTLING promotion ever?!

DS: ROH is its own thing. It’s awesome and has been awesome for a while. I think they have a great thing going and hopefully it remains successful.

WF: Thank you very much for your time, David, do you have some personal words for your German fans?