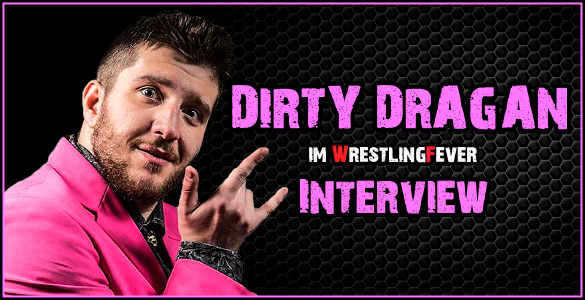 WF: Thank you for your commitment, Dragan!

DD: Yeah, no problem, my man. Sorry for taking so long.

WF: Even though active since 2012, you just recently made yourself notable to German fans by appearing at wXw several times. But let´s start at the beginning, you are originally from Holland and were trained there, right? With whom did you train, where and how long?

DD: When I decided I wanted to be a wrestler, I found out that my options to train were at PWH or wXw. I chose PWH because it seemed easier, seeing as I wasn’t very confident about my German speaking skills. Honestly, the wXw dojo was about a 2,5 hour drive from my house, and PWH about 3.
Anyways, I was trained mostly by Tengkwa and Gabriel Angelfyre. I would recommend anybody from the Netherlands, wanting to become a wrestler, to check out the PWH dojo. I was in training for about a year before I did my first match, but I only started understanding what the hell I was doing 2 years later.

WF: You look very athletic but surely, like most of your colleagues, you didn´t start out that way. Did the change come naturally or did time change your attitude towards your fitness and looks?

DD: Well, thanks. The only reason I work out or watch what I eat is for wrestling. I hate working out. If I never worked out and ate everything I felt like I would be fat but still beautiful, so I have that working for me. When I was still a fan, I never noticed wrestlers‘s bodies, really. But when I started becoming involved in the business and the backstage, that’s when I noticed how obsessed and insecure people in wrestling are about their bodies. My goal in fitness has never been to look like a model, I’d rather look like a dad who can kick someone’s ass.

WF: How did you come up with your name ‚Dirty Dragan‘ does it have a story or a reference to your roots?

DD: Well, my real name doesn’t really roll off the tongue. I always felt like nobody would remember “Amer Spahic”. Then again, if they can remember the name “Emil Sitoci” maybe my name wouldn’t be that hard either. Meh, let’s just say that the reason to pick Dragan was because it’s easy to remember internationally. Even if they can’t say Dragan properly, they can call me Dragon and it’s fine. I think Andrew Patterson named me Dragan, one time in Ireland, actually. The “Dirty” part is because I was a big fan of this American rapper Dirt Nasty. Basically I decided I wanted to be the wrestling world’s Dirt Nasty.

WF: We often see you alongside a colleague, mostly with Young Money Chong. Is there a bond between you outside the ropes like a friendship, common history or maybe trained together?

DD: We trained together. He was at PWH a few years before me. I like him, he is a good person.

WF: With your entertainment you even out any possible weaknesses – do you like doing comedy – how important do you think is entertainment for wrestling?

DD: I think comedy is my favorite genre of wrestling. I fell out of wrestling for a while, and had a lot of problems with clinical depression. I wanted to quit training and just didn’t care about wrestling anymore. Until, one day, I think I saw a DDT show, and I realized that comedy wrestling is what I want to do.
If people want to see action and highspots, the promotions I work for have a lot of people who do that already. I think that any promotor that knows what he’s doing tries to offer different things, different flavors of wrestling, to an audience. Also, I want kids, and first time wrestling audiences to understand what I am doing and be able to enjoy it. A big problem in wrestling nowadays is wrestlers trying to do everything, every match. I think that sucks, but that’s a story for another day.

WF: A question I always ask is, how did you get into pro wrestling?

DD: I have no idea. I always liked it. Was always interested in it as a kid. I think I saw TNA on eurosport in 2005 or something. Shark Boy was on the card. I want to be Shark Boy.

WF: Do or did you have idols or role models?

DD: I dunno. Not really in wrestling. I love Riff Raff, the rapper. I like Lady Gaga. My favorite wrestler as a young kid was Sabu, but I wouldn’t say he is a role model. I don’t know, man. This question is hard.

Fuck it, Great Muta. If I had to hang a poster of somebody on my wall it would be Muta. He looks cool.

WF: Do you attend seminars or train at the ‚wXw Academy‘?

DD: Yeah, every once in a while. It’s fun and really good for beginners and advanced people alike. I believe everybody can learn new stuff. Once you stop training and don’t try to improve anymore, you might as well quit, I think.

WF: Do you follow the career of Tommy End (Aleister Black) at NXT, do you still have contact? How far, do you think, can he go?

DD: Nah, I don’t care about him. He can go as far as he allows himself to go.

WF: What are your future plans, would you like to break through as a singles competitor or work in a team – where do you see yourself in five years?

DD: In 5 years I want to main event Wrestlemania against Triple H. Winner gets Stephanie.

WF: Thank you very much for your time, Dragan! We wish you all the best!

DD: I wish you the best too. Find me at DirtyDragan on every social media platform. Also buy my shirt. I need money. My life is a mess.