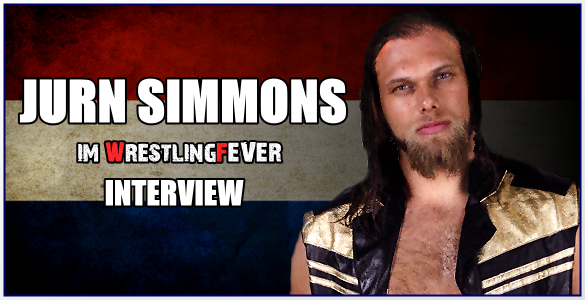 WF: Thank you for your commitment, Jurn, how are you these days?

JS: You’re welcome, I’m pretty good myself. Thanks for asking.

WF: You are from the Netherlands and, of course, fought your first matches there. That was three years ago, how did wrestling change for you – from fan to pro wrestler. Do you see it in *a different light*?

JS: Not really, I was never a huge fan of it and had never even seen a show live before I started training myself. If anything I’ve learned to appreciate it much more since doing matches and being a part of shows myself.

WF: Who or what was it that got you into this sport?

JS: I had seen it on TV around 2000-2001, I enjoyed watching it when it was on but never heavily followed it. I always did plenty of sports as a kid, but fell out of of it in my teens. Years later I saw a Dutch TV show do a special on sports entertainment once and I wanted to do something new athletically. Sports entertainment seemed like something completely different so I wanted to try it out.

WF: Do you have personal idols or even icons, aside from Karsten Beck? 😉

JS: No. Of course I look to different things in sports entertainment for inspiration and whatnot, but I try to look for that in every other form of media as well so there’s nothing or nobody in particular that I look up to more than others.

WF: In Germany we currently know you as *heel* together with Karsten. Is being *bad* your thing, do you see more possibilities to be yourself in it? – In short, do you rather feel like a heel or a babyface?

JS: I personally think the whole heel/babyface dynamic is getting a bit mundane, but that’s a different story for another time I suppose. In general it has been more natural and rewarding for me to be a villain, so I do see a lot more possibilities and growth in that area as opposed to the other.

WF: The business is thriving, in Germany as well as in the Netherlands the interest in wrestling seems to increase again. What do you think is the reason? Are *we* finally ready to present our product, our talents to the world, are *we* professional enough for it?

JS: I suppose it would be due to everybody stepping up and becoming more professional. I’m sure the talent has always been there, it just needed better direction and more focus which is something an awful lot of people lack. I don’t watch a lot of sports entertainment, but I believe, from what I do see come by every now and then, that most of the products I’m associated with can be presented to and be held up to the standards of the rest of the world. The language barrier might be a problem, but in general I think the shows/matches/promo’s/etc can be enjoyed by nearly anybody.

WF: Your appearance changed during the past years, your body got more athletic and your hair is growing. Do you think that *long hair* belongs to wrestling or do you have personal reasons for the new look (hair/beard)?

JS: It’s a combination of things. It had to do with standing out and me just being a bit lazy in that department. I started off with a very bland look and image, so I wanted to change that and growing my hair and beard out and stuff was more of an experiment. Then it just became easier not to get it cut or to do anything about it really, but it seems to have worked out okay in my opinion.

WF: Do you have personal goals in this sport? Maybe even WWE?

JS: WWE would be cool, but I don’t see that happening in the near future and I’m not a big long-term planner. As far as goals go now, it’s mainly just about developing and becoming the best I can be while also increasing the amount of bookings I get and the pay that comes with it.
The endgame is definitely to just become the very best though.

WF: How do you keep yourself in shape? Did or do you do other sports?

JS: Like I said earlier, I did a lot of sports as a kid. From karate to football to tennis to kickboxing to gymnastics, but it was never for very long amounts of time. Just brief periods to get the feel for it and to get bored with it so that I’d move on to the next one.
Now, besides sports entertainment, I mainly just lift weights in the gym with the occasional cardiovascular exercises.

WF: How often do you exercise? What does your typical day of training look like? Do you have a strict diet to follow?

JS: I work out 6-7 times a week. The way I train, as far as sets, reps and everything goes, depends on whatever I want to achieve at that time. Right now I’m trying to improve my strength and mass, so I don’t do a lot of reps but have a decent amount of rest in between the sets. With dieting I don’t have specific things I eat day in and day out, I just try to eat healthy meals every 2-3 hours.

WF: At wXw you work together with the best German-speaking talents. What does the wXw mean to you?

WF: Let´s say you get the opportunity of a long term feud, who would you like to feud with and why? Is there someone at wXw?

JS: There are plenty of guys at wXw I’d like to feud with, for example: Axel Dieter Junior, Tommy End, John Klinger, Ilja Dragunov, Big Daddy Walter, Absolute Andy, etc. The list could be longer, but I think you get the point. I feel that there’s a lot to explore with me and pretty much everybody there.

JS: I remember that my first match as part of Keel Holding went fine and I had fun until the end where I landed badly on one of my knees and then I had to drive home and perform on it the next day in the Netherlands.

WF: Let´s pretend you are booked for Wrestlemania – who would be your opponent of choice?

JS: Brock Lesnar or The Rock. They’re the biggest draws.

WF: We always ask our guests about interesting or funny *Road Stories* they´d like to share, do you have one for us?

JS: The only noteworthy road stories I would have are just ones that end in accidents and near-death experiences, so I’ll spare you the details on those.