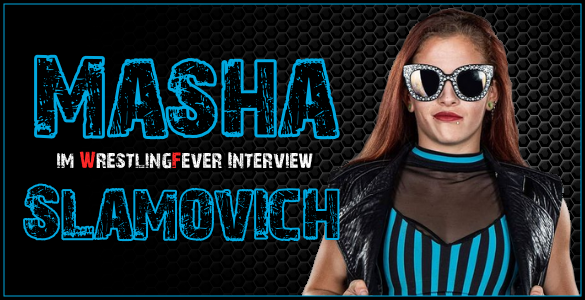 WF: Thank you Masha, hope you are doing well.

WF: I keep being amazed by the development of some people. You are a young Russian wrestler who already worked in the USA and currently living and working in Japan, right?

M: Yes that is correct. However since January 27th I’ve been back in the United States, thought I did spend all of 2020 living & wrestling in Japan.

WF: How different are living and wrestling in America compared to Japan? Can you make a living in Japan even though you are from abroad?

WF: Can you describe a typical day for you? How different are weekdays from weekends?

M: Usually we are training daily in the Marvelous dojo. I would go on my own morning run when I wake up, proceed to shower, walk my dog, and have breakfast before training began at 10:30. We would train until 2:00-3:00 and then break for lunch. Everyone had their own things to attend to after that, I would usually go & have my lifting session around 5:00-6:00 and then on Friday’s run a YouTube live workout from 8:00-9:00. Saturday could either be off days or a different training schedule, and Sunday’s were days off. Of course on show days things were very different & the day after a show was always a day off aswell unless there was another show to attend.

WF: Do you need a work visa which needs to be extended regularly or do you have a stay permit by now? As far as I know you already went on several tours through Japan, right?

M: I did require a work visa that was extended every 3 months on my trip. And as you said I have toured in Japan before but did not obtain any citizenship or anything of the sort.

WF: Let´s go to the start of your career. When did it start, where and with whom did you get your first experiences in pro wrestling? I think you discovered it around 2000 while zapping through tv channels?

M: I started training with Johnny Rodz at the World of Unpredictable Wrestling on 11.22.14 at the age of 16 and trained there until my debut match on 07.08.16 for Reina Joshi Puroresu in Tokyo, Japan teaming with KONAMI & Yako Fujigasaki VS León, Hanako Nakamori & Mika Iida. I discovered wrestling in thr early 2000s yes and watched mainly WWE until I got online & started watching indies & so on.

WF: How do parents react when one says: “I want to be a pro wrestler and I´ll go to Japan!“ I can imagine that the first reaction is either shock or worries?

M: When I said this is what I want to do with my life they thought I was joking & would ‚grow out of it‘ and upon starting training they were still not hopeful for my career. Once opportunities started rolling in & my work began to progress they became more supportive when they saw me getting places. They both worry that I will get hurt of course especially because of my style, but they enjoy seeing me happy chasing my dream.

M: I assume you mean in wrestling & some of those names would be
Dynamite Kid
Chris Benoit
KENTA
Bret Hart
Eddie Guerrero
The Undertaker

WF: How often do you train and work out and what others sports are or were you involved in?

M: I workout daily, twice a day usually. I used to be involved in track & field, swimming, and equestrian sport alot back when I first started but now I only wrestle & train BJJ at Renzo Gracie Academy.

M: 11.22.14 is the date I first set foot in a wrestling ring & started training. It is the day my journey began. Funnily enough both Chris Benoit & the Undertaker, 2 wrestlers I greatly looked up to both started on that date as well, so it felt kind of feels like destiny right haha.

WF: Via tryout with EVOLVE you were able to get a first glance at NXT. Can you tell us about it? How did it work, what was the feedback and is working in the USA a long-term option for you?

WF: Do you have dream opponents or favourite matches?

M: Absolutely. I’d love to wrestle the likes of Meiko Satomura, Bea Preistley, Miyu Yamashita, Kris Statlander, among others.
Some of my favorite people to face as of now are Chihiro Hashimoto, DASH Chisako, Mio Momono, Mei Hoshizuki, and Ryo Mizunami.

WF: What are your goals, it looks like wrestling comes first in your life?

M: Wrestling does come first to me. It’s what i poured every moment of my life into, and it’s what I’ve always wanted to do. Now that I get to do what I’ve yearned to do for years, I’m just so happy living the journey. My goals are really to take over all of wrestling, I want the world to know my name. Indies, TV, travel around to places like Australia to wrestle & see the world. And hopefully be world campion one day.

WF: How did you get the name ‚Skinripper‘?

M: It is actually one of my last names in Russian. It translates to Skinripper so that’s quite literally my name. However I no longer use that name & have not since 2016.

WF: You also wrestled for CZW which is known as a hardcore promotion here. Can you identify with ‚hardcore‘ wrestling, is it something you would do over a longer period of time?

M: Hardcore is definitely something I identify with & hope to do more of in the near future. To clarify, hardcore & deathmatch are 2 different things. I’ve never wrestled a deathmatch (yet) but I’m sure that will change soon aswell.

WF: Germans are also familiar with ‚Impact Wrestling‘ which currently is on a good track again. How do you remember your appearance there, how did you like it?

M: I thoroughly enjoyed working with IMPACT during June of 2019, and would enjoy another opportunity to do so. I have fond memories of my time there & enjoyed wrestling both Jessica Havoc & Jordynne Grace.

WF: Leyla Hirsch recently signed with AEW, you have worked with her before. How far do you think can she go and do Russian wrestlers stick together, stay in contact? How did you hear about her contract signing?

M: Leyla Hirsch is a great opponent, and a skilled wrestler. I believe she will go far in AEW & wherever else she sees fit as she works to achieve whatever she puts her mind to. We do stay in contact and I also stay in contact with other Russian wrestlers still in Russia wrestling for IWF Moscow. I heard about Leyla’s signing via social media.

WF: We wish you the greatest of success and stay safe!

M: Thank you very much & best of luck to you aswell!